The Federal Bureau of Labor Statistics reports that workers on Guam had an average mean hourly wage of $17.75 in May 2019 which is about 31 percent below the nationwide average of $25.72.

Assistant Commissioner for Regional Operations Richard Holden noted that, after testing for statistical significance, wages in the local area were lower than their respective national averages in 21 of the 22 major occupational groups, including management, computer and mathematical, and legal.

When compared to the nationwide distribution, local employment was more highly concentrated in 8 of the 22 occupational groups, including construction and extraction, management, and building and grounds cleaning and maintenance. Conversely, eleven groups had employment shares significantly below their national representation, including production, healthcare support, and healthcare practitioners and technical. 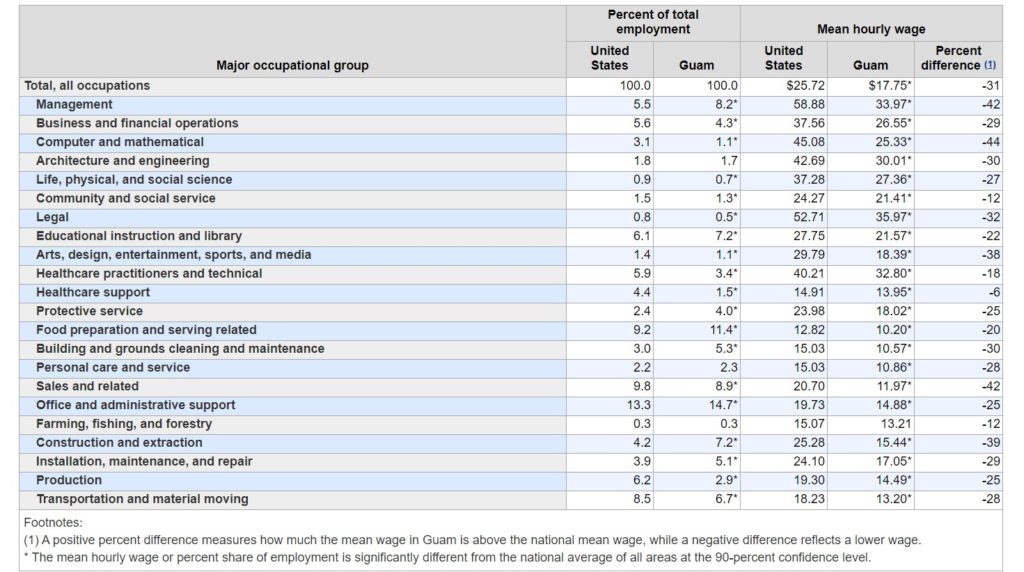 One occupational group—construction and extraction—was chosen to illustrate the diversity of data available for any of the 22 major occupational categories. Guam had 4,610 jobs in construction and extraction, accounting for 7.2 percent of local area employment, significantly higher than the 4.2-percent share nationally. The average hourly wage for this occupational group locally was $15.44, significantly below the national wage of $25.28. 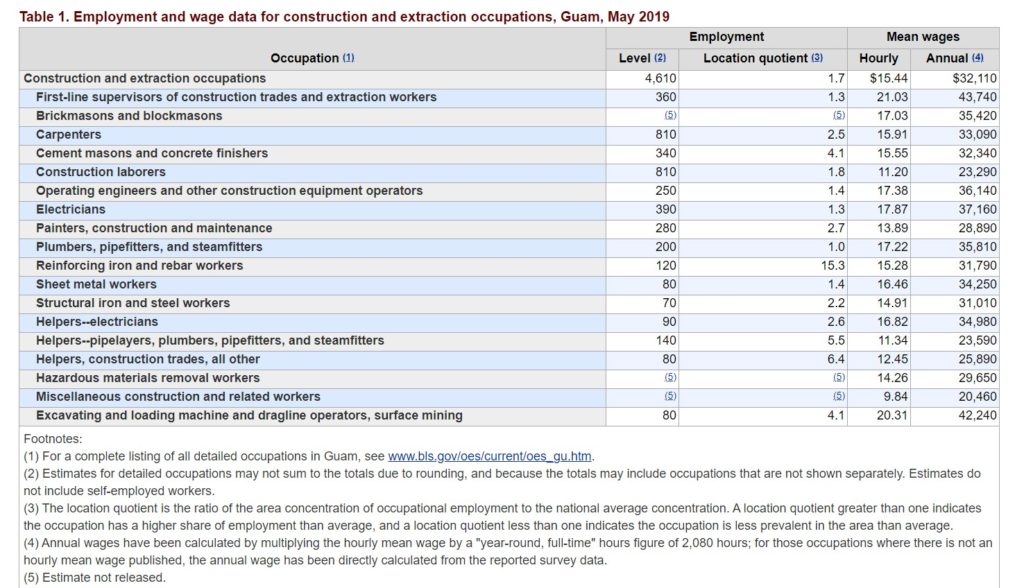 Location quotients allow us to explore the occupational make-up of a metropolitan area by comparing the composition of jobs in an area relative to the national average. (See table 1.)

For example, a location quotient of 2.0 indicates that an occupation accounts for twice the share of employment in the area than it does nationally. In Guam, above-average concentrations of employment were found in many of the occupations within the construction and extraction group. For instance, cement masons and concrete finishers were employed at 4.1 times the national rate in Guam, and construction and maintenance painters, at 2.7 times the U.S. average. Electricians had a location quotient of 1.3 in Guam, indicating that this particular occupation’s local and national employment shares were similar.

These statistics are from the Occupational Employment Statistics (OES) survey, a federal-state cooperative program between BLS and State Workforce Agencies, in this case, the Guam Department of Labor.