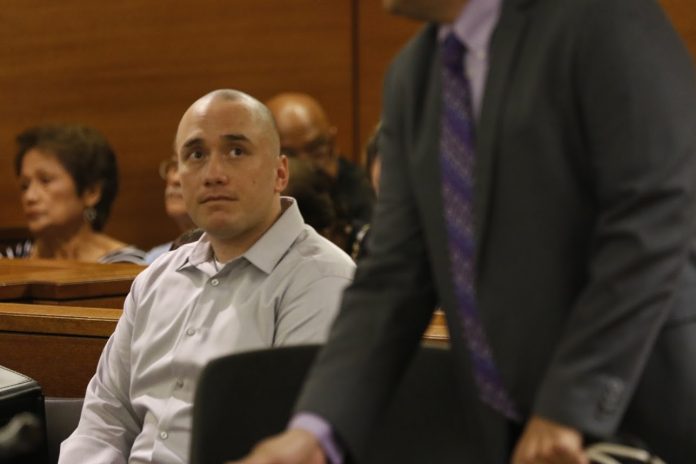 For the first time since July 13, 2015, the body cam footage that was taken was played back in Superior Court, revealing some unsettling details.

Guam – The body cam footage that was taken the night police officer Sgt. Elbert Piolo was killed was played back in Superior Court today for a motion to suppress hearing.

It’s the first time the Piolo family has heard or seen the footage. Dededo Precinct Supervisor Officer Barry Flores testified today saying former Police Officer Mark Torre Jr was never considered a suspect at the time the body cam was rolling. On that note, the prosecution says because Torre was not considered a suspect at the time, Miranda Rights did not need to be read to him.

Officer Flores will testify again this Friday where the defense will try to prove that Torre’s Miranda rights were violated because they believe Torre was not “free to leave” as he was being questioned by Officer John Edwards who was one of the first officers to arrive at the scene of the shooting.

On the body cam footage, at one point, Officer Flores is heard asking Torre if the shooting happened inside Piolo’s truck, which was parked outside the Torre residence at the time. Although the public was not allowed to see the footage, Flores clarified on the stand that Torre responded by shaking his head, “no.” In the video Officer Flores is heard asking if the shooting happened outside the truck. On the stand today, Flores said Torre again shook his head “no.”

Finally, in the video Officer Flores asks Torre if it was self-inflicted to which Torre responded in the video by nodding his head.

Judge Michael Bordallo will ultimately decide whether the body cam footage is admissible as evidence for trial. Chief Prosecutor Phil Tydingco says he may call up to three more officers to the stand to testify.

Torre is facing murder, aggravated assault and manslaughter charges in Piolo’s death. He has pleaded not guilty.

Meanwhile the trial has been delayed by a few months. It was initially scheduled for February 8 but may be pushed back to sometime in June to give the defense time to have forensic experts examine the evidence.