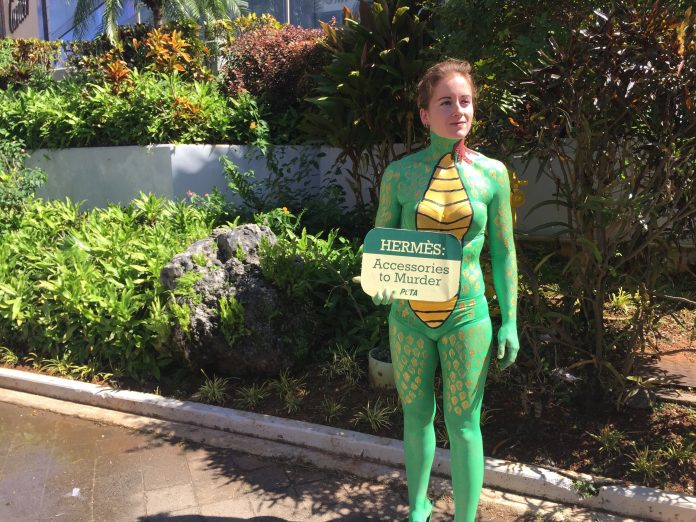 Ashley Fruno flew to Guam just to stage a protest outside of Hermes on Black Friday.

Guam – A representative of PETA or People for the Ethical Treatment of Animals staged a protest outside the Hermes Store a T-Galleria today.

Fruno flew out from Manila just to stage this protest, holding a sign that read Hermes: Accessories to Murder. She also spent hours covering herself in green and gold body paint to emulate the appearance of a crocodile.

PETA has been strongly opposed to high end luxury brands, such as Hermes, and has been encouraging people to boycott the store because of how they treat crocodiles. Crocodile-skin is often used in the production of the brand’s luxury handbags, belts, bracelets and other accessories, many of which can retail for tens of thousands of dollars.

“For exotic skin products, snakes, crocodiles, lizards have their throats slit, often times they’re still fully conscious. Many of them are skinned alive. It’s cruelty that we can all do without so we’re simply asking people to boycott exotic skins product,” Fruno says.

Asked whether PETA’s campaign against Hermes has had any success in the past, Fruno notes, “There are several companies like Top Shop and Victoria’s Secret who no longer sell exotic skins products thanks to efforts from PETA and I think that around the world awareness is growing and hopefully after today’s protest, awareness among both tourists and locals in Guam will have also increased.”

You can learn more about PETA’s campaign at PETAasia.com. A representative of Hermes was not available for comment as of news time.