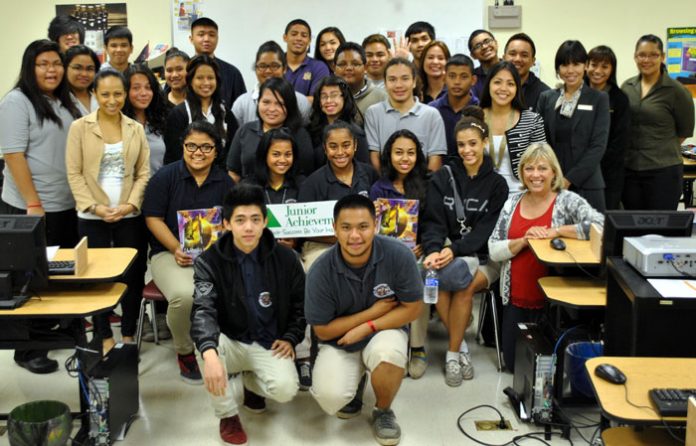 Guam – Bank of Guam volunteers coached the Okkodo Bulldogs to a 4th place finish, the highest ever for a Guam team, in a national Junior Achievement Program.

JA Banks in Action, a Citicorp sponsored program, spanned 8 sessions during a 2 week period prior to the Island-wide Competition which was held March 21, 2013 during which the top teams advanced to the National Competition.  The BOG-coached Okkodo Bulldogs were the only team to make it to the final round nationally, finishing in 4th place.

The Bank of Guam volunteers were Vice Presidents Reanna Cruz, Lesley Leon Guerrero and Wayne Santos, Assistant Vice President Valerie Mafnas and Pro-Assistant Cashier Patrina Perez.  The participating students are from the classes of Susan Baxter and Clynt Gianchand and are juniors and seniors in the Business Class at Okkodo.

The JA Banks in Action program is a volunteer-led program where students learn the fundamentals of the banking industry and then have the opportunity to apply what they learn in a competitive environment using a computer simulation program.  Through the simulation, students form banking teams and operate a bank over time by making several decisions, each of which represents three months or a calendar quarter.  The banking team that develops the best strategy and makes a greater profit than its competitors is the winner, earning the title “Bank of Choice.”