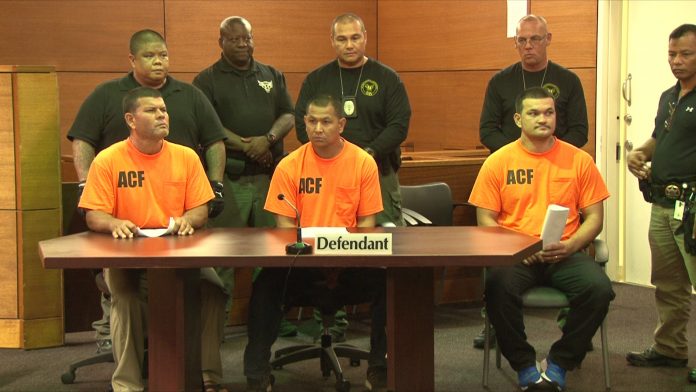 Guam – Their crime and burglary spree appear to be over. Irvin White, his father, Jackery White, and Edward Baza are being held on $1 million cash bail each for last year’s Yigo Bank of Guam robbery. But police say the Whites were also wanted on a string of other burglaries.

The three suspects, Irvin White, his father, Jackery White and Edward Baza appeared in court to face charges related to the armed robbery of the Yigo Bank of Guam last February. However, the father-son duo were also in court for other alleged burglaries they committed.

According to a magistrate’s complaint, Irvin White, already in custody for the Days Inn robbery, wanted to come clean, so he confessed to being one of 3 suspects in the bank robbery. White went into specific detail about the crime and police say they were able to corroborate his statements, matching the getaway vehicle with surveillance footage from nearby establishments.

According to White, the three met at his father’s ranch off Chalan Natibu in Dededo. They drove to the bank and Jackery parked his truck near the jungle area behind the bank. White says he and Baza got down and proceeded to rob the bank, with Baza holding the gun and White collecting cash.

They then ran back to the truck and left. According to White, the three got away with over $11,000.

Two days after White’s confession, his father, Jackery was arrested, but not for the Bank of Guam robbery–at least not yet. He was arrested for an investigation into a robbery at a 76 gas station and then subsequently identified as the suspect into a home invasion of Attorney Gary Gumataotao’s home.

Since he was already in custody, Jackery was asked about the Bank robbery and police say he, too confessed. His statements, police say, matched that of his son Irvin, with one minor difference. Jackery says he wasn’t the mastermind as his son claimed, but it was all Baza’s idea.

Baza, however, denied any involvement in the crime, telling police he had no idea why the Whites named him in the conspiracy.

There was yet another burglary the Whites were charged in. It’s the October 2014 burglary of the San Ramon Building in Hagatna in which the father and son allegedly stole a bush cutter and blower and also a safe from a collection agency.

Judge Alberto Tolentino also set the bail at $100,000 each for Jackery and Irvin White for the San Ramon Building burglary, and another $100,000 for Jackery White in the burglary of Attorney Gumataotao’s home.