“This second quarter, we saw strong gains in shipping, restaurants and home improvement with seven out of the 11 sectors posting positive gains compared to second quarter 2012, indicating that consumer confidence is steady,” stated Dacanay. “The recent weakening of the yen appears to have affected Guam’s tourism sector somewhat as hotels, travel agencies and retail declined this quarter.” 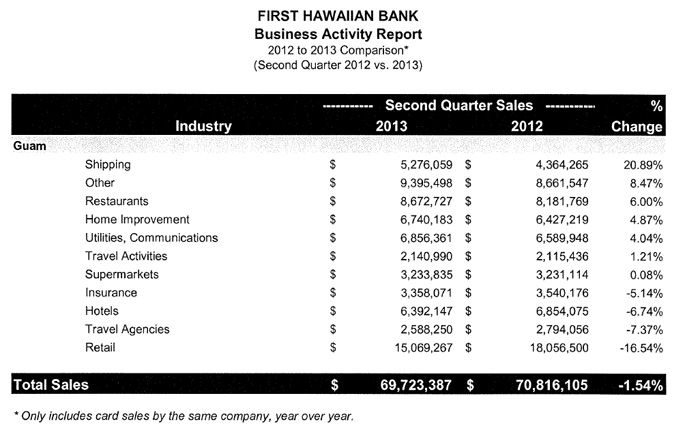 First Hawaiian is a major processor of debit and credit card sales transactions. In 2012, the bank processed over $4.3 billion worth of credit and debit card sales
transactions in Hawaii, U.S. Mainland, Guam and CNMI. First Hawaiian Bank (www.fhb.com) with assets of some $16.4 billion, was founded in 1858 and is the leading bank in Guam with the largest share of loans and deposits in the region. First Hawaiian Bank has over 7,000 merchant locations throughout Hawaii, U.S. Mainland, Guam and CNMI and processes all major U.S. credit cards as well as JCB, China Union Pay and BC Global