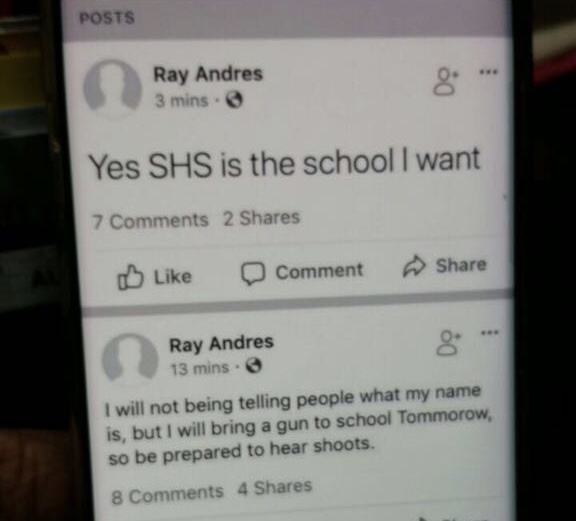 Guam – While the nation reels from a tragic school shooting in Florida, authorities were responding to a couple threats here at home.

Guam Homeland Security says a bomb threat was called in for Guam High School, forcing the evacuation of the high school and surrounding homes this afternoon. Guam Police and Navy Police were on the scene to conduct a sweep of the area with their K9 units. The Naval Base Guam Explosive Ordnance Disposal unit remained on standby during the search as students and surrounding housing areas were evacuated.

It appears nothing was found as the all clear was called shortly before 5 p.m.

Meanwhile, a Facebook post from an individual claiming he was going to “shoot up SHS” has been circulating social media.

A screenshot of the post circulating on social media had students and parents at Southern High School a little spooked, but the Guam Department of Education says the image isn’t just scaring people here, but all around the United States.

After conducting some research, they found that there was no such person registered at GDOE and further searches found that his Facebook page is non-existent.

GDOE says although there’s no guarantee “SHS” doesn’t refer to Southern High, they’ve been told that the threat is being monitored by the Offices of Guam Homeland security and Civil Defense, the Mariana Regional Fusion Ceenter and the Guam Police Department.

A Facebook search shows that others in the US were just as confused by the vague use of “SHS.” Posts from Mississippi, Alabama, North Carolina and Indiana all referred to the screenshot, warning students to be careful.

It’s since been confirmed that the school referred to in the post is in Springfield, Ohio.

Meantime, here on Guam, GDOE confirms that all schools will be open Friday, including Southern High. All agencies monitoring this threat are taking it very seriously.