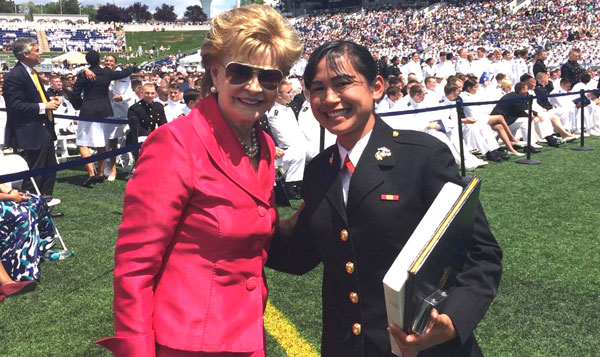 Guam – Congresswoman Madeline Bordallo attended the recent graduation ceremony at the U.S. Naval Academy where she congratulated Guam resident Riacca Slater who was commissioned as a second lieutenant in the U.S. Marine Corps.

READ the release from Congressman Bordallo below:

Congresswoman Madeleine Z. Bordallo recently attended the graduation and commissioning ceremony at the United States Naval Academy (USNA). At the ceremony, 1,068 men and women were commissioned as Navy ensigns or Marine Corps second lieutenants. Secretary of Defense Chuck Hagel was the primary speaker at the ceremony, and he was accompanied by Secretary of the Navy Ray Mabus, Chief of Naval Operations, Admiral Jonathan Greenert, and Commandant of the Marine Corps, General James Amos.

Guam resident Riacca Slater was commissioned as a second lieutenant in the U.S. Marine Corps. Riacca is the daughter of Mr. and Mrs. Roger Slater from Ipan, Guam, and was nominated by Congresswoman Bordallo to the USNA. She graduated with a degree in Political Science and was a member of Nineteenth Company during her time at the USNA.

“The Naval Academy, and all our service academies, provides young men and women from across the country with an outstanding education and the training needed to be officers in our military,” said Congresswoman Bordallo. “I am especially proud of Riacca Slater, and I wish her the best as she begins her career as a second lieutenant in the U.S. Marine Corps. I am confident that she will continue to represent our island well.”