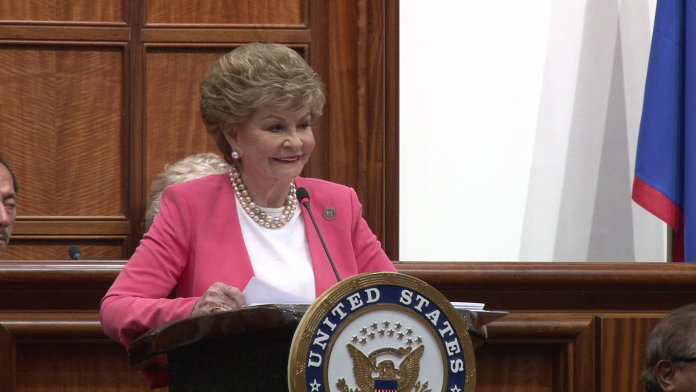 Guam – The Guam Congress Building was filled last night for Congresswoman Madeleine Bordallo’s Congressional Address as she touched on key accomplishments during her 15 years in Congress as well as initiatives she is still working on for Guam. Among them, completing the decade-long war claims her predecessors lay the foundation for.

It will perhaps be a part of her legacy as Guam’s delegate to Congress, passing legislation to fund War Claims for thousands of the island’s manamko’ who suffered atrocities at the hands of Japanese soldiers during World War II.

“Securing this recognition has been a driving force behind my work in Congress, and we can finally see the end of this long journey,” she said.

Since the registry was opened up for survivors to file for war claims, the Congresswoman reports that 3,640 claims have been filed so far. Of them, over 3,000 are living survivors of the Japanese occupation.

Because of the high volume of submitted applications, Bordallo says the process may take some time to complete.

“I will not rest until this process is brought to final completion,” she assured.

Other key issues she touched on was on foreign labor, healthcare, compact impact, the military buildup and, of course, North Korea.

“A provision I included in last year’s defense bill allows an additional 4,000 H-2B visas to be approved for civilian and military construction projects related to the Marine relocation, and we are already seeing visas approved as a result of my provision.

“In addition to helping GMH navigate through its challenges with [Centers for Medicare and Medicaid Services] and loss of accreditation, I am working with my colleagues in Congress to ensure that all federal monies allocated to Guam continue to be available.

“I am fighting to ease the burdens of the Compact Impact, and this year I successfully beat back the Trump Administration’s proposal to eliminate $3 million in Compact Impact funding.

“I am pleased to report that the Senate, in record time, passed the NDAA today and is now headed to the President for his signature,” she announced.

Initiatives she’s working on will focus on securing voting rights for the territories, improving the island’s environment and expanding veteran services on Guam.

“I am pleased to announce that I will be introducing legislation upon my return to Congress this fall to authorize offshore wind development and guarantee Guam a state-equivalent share of royalty payments,” she told the crowd. “But my office has already been approached by offshore wind developers very interested in Guam.”

Finally, as it is an election year with two opponents hoping to unseat the seven-term delegate, Bordallo reminded the crowd that in Congress seniority matters.

“There is no denying that the season is ripe for the cynics to swing left and right and for competing voices to say that I have failed or that I did not do enough or that others deserve the same chance to bring about change and progress we hope to see. To be quite frank, I am not deaf to those voices. But having dedicated my waking moments to serving the people of Guam for over 50 years, I know that walking out on seniority and leadership in Congress and the ability to achieve even the smallest milestones for our people will be regrettable,” she concluded.