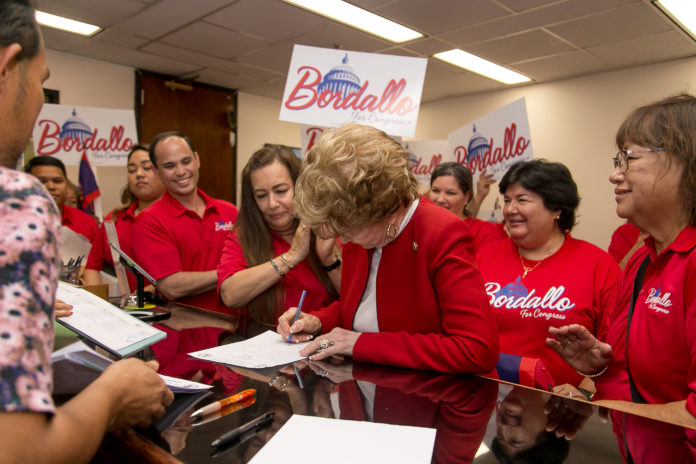 Guam – Incumbent Congresswoman Madeleine Bordallo has made it official, filing her candidacy for the single, non-voting delegate seat to the U.S. House of Representatives this afternoon.

If elected, this would be Bordallo’s ninth term in office. Bordallo is the first female from Guam elected to the House, taking office in 2003 after leaving Adelup as the lt. governor.

For several of her eight terms in office, Bordallo ran uncontested. This election year, however, she’ll be facing two opponents, one from her own party.

Sen. Michael San Nicolas and Bordallo will be facing off in the primaries and yesterday, Public Auditor Doris Flores Brooks announced that she will be running for Congress as a republican.

Bordallo and her supporters walked to the Guam Election Commission this afternoon to make the announcement.

“I thank my faithful village leaders and supporters gathered here today who have stood by me for many years.  Many of you were supporters during Ricky’s time.  I couldn’t do it without the grassroots support,” said Congresswoman Bordallo in a statement. “I am humbled by the opportunity to serve our people and I, once again, ask for their support in the upcoming election.  I will continue fighting for our people. This is a promise that I made to Guam when I first began my life of public service. You all know that when I start something and make a commitment to our people, I follow through until the job is done. There is still work to be done in Washington, and as Guam’s only representative in Congress, I recommit myself to promoting our island’s priorities and bringing real federal attention to our issues. I humbly ask the people of Guam to continue to put their faith and trust in me.”

Today is also the congresswoman’s birthday and she has traditionally filed her candidacy on this day every election season.