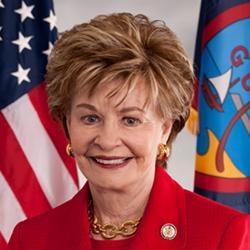 Guam Congresswoman and chair of Guam’s delegation to the Democratic National Convention Madeleine Bordallo had the national spotlight this week, as votes were tallied for the party’s national ticket.

Bordallo announced from the convention floor, the Guam delegation’s votes—the only ones Bordallo said Guam Democrats will cast for president—
“We want a president who is sensitive to our needs…a president that supports our rights for full self-determination and self-governance, as ratified in the Democratic platform.  Therefore, it is with great optimism that we proudly cast two-votes for Senator Bernie Sanders, one absent, and nine-votes for the next president of the United States, Hillary Rodham Clinton…” says Bordallo.
Bordallo spoke later about dissent by Sanders supporters, many of whom walked out of the Wells Fargo Convention Center in protest after Sanders conceded Clinton’s nomination.   That followed release of hacked e-mails earlier in the week that showed party officials favoring Clinton, and forced the party chair’s resignation.
Bordallo says, “…and then we saw a number of them walk off the convention floor, but all in all…and some remained.  So, it’s always hard to lose.  And, perhaps in the days to come…however, we warned that we probably wouldn’t be able to get a hundred percent of them.  So, that was kind of expected.  There are some that were just very, very hurt that he conceded…they didn’t think he should have…and a few that even made remarks like, ‘We’re not finished, yet.’”

But the convention has now made history, nominating the first woman to lead a national party ticket for president.  But Guam residents won’t be able to vote for her.

Bordallo points out the Democratic platform calls for islanders to be able to vote for president.  It also addresses veterans and healthcare issues in the islands.

Meantime, Bordallo says a change in convention rules that she spearheaded years ago,  elevates the territories from last place in the nomination roll call to their place in alphabetical order—sparing the islands from near irrelevance after a candidate’s already secured the nomination.