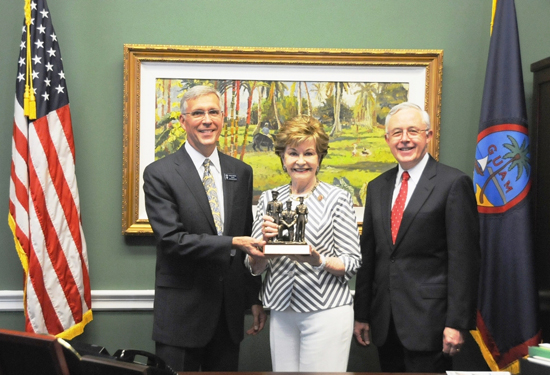 Washington D.C. – Congresswoman Madeleine Bordallo received a Sea Cadet trophy for her efforts to support the United States Naval Sea Cadet Corps (USNSCC) in annual defense authorization and appropriations legislation.
The Sea Cadet trophy is awarded annually to one Member of Congress, as well as to one member of the Navy League and one member of the sea services. Congresswoman Bordallo is the first Member of Congress to receive this award.

The USNSCC is a non-profit youth organization sponsored by The Navy League of the United States and federally chartered by Congress in 1962. The program is focused on the professional development of youth ages 11-17, serving almost 12,000 Sea Cadets and adult volunteers in 392 units countrywide and the territories of Guam and Puerto Rico.

[Congresswoman Bordallo receives the first Sea Cadet trophy ever awarded to a Member of Congress for her work in supporting the United States Naval Sea Cadet Corps in annual defense authorization and appropriations legislation. She is joined by Randy Hollstein, left, National Chairman, and Jim Monahan, right, Executive Director.]

“I appreciate this honor, and I will continue to support this important program for the United States Navy,” said Congresswoman Bordallo. “This important youth development organization promotes interest and skill in seamanship and aviation, while instilling qualities that mold strong moral character in an anti-drug and anti-gang environment. Summer training onboard Navy and Coast Guard ships and shore stations is a challenging training ground for developing self-confidence and self-discipline, promotion of high standards of conduct and performance and a sense of teamwork. The Navy Sea Cadet units on Guam, with the help of many dedicated volunteers, provides youth with safe and educational opportunities. The program readies them for future opportunities in the Navy, in higher education or in certain trades.

A significant percent of cadets join the Armed Services directly from high school, often receiving accelerated advancement, or obtain commissions through college ROTC or the Service Academies. Moreover, the program has significance in assisting to promote the Navy and Coast Guard, particularly in those areas of the U.S. where the Services have little presence. Again, I appreciate this honor and I will work to ensure that this program remains affordable for future defenders of our nation.”