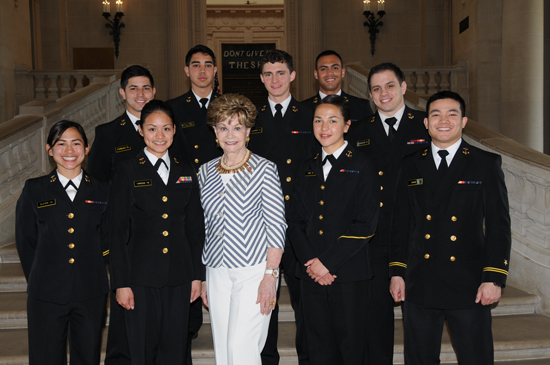 Ten Midshipmen from Guam are currently attending the USNA in preparation for their service in the U.S. Navy or the U.S. Marine Corps. The Congresswoman was greeted by Captain Robert E. Clark, the Commandant of Midshipmen, and joined him in viewing the noon formation before having lunch with the Midshipmen in King Hall.

“I always enjoy visiting our young men and women from Guam at the Naval Academy in Annapolis,” said Congresswoman Bordallo.  “These hardworking and motivated Midshipmen will, in due time, join many others from Guam who have graduated from the Naval Academy and are now in the U.S. Navy and Marine Corps. I thanked them for their commitment to serving our country, and I urged each of them to continue working hard toward their graduation. As always, I continue to encourage high school students on Guam to consider the USNA and the other service academies among their career options for military service.”