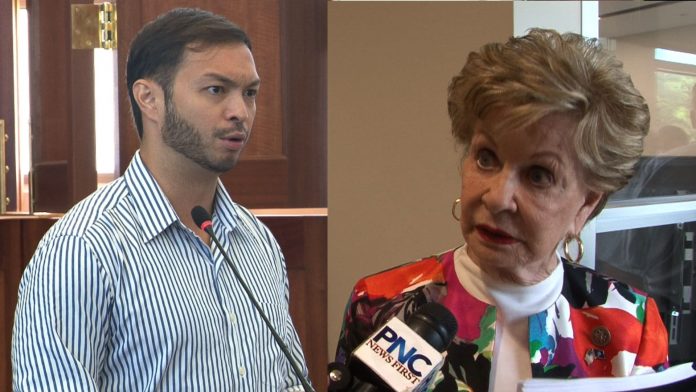 Guam – Will DC be big enough for the two of them? Madeleine Bordallo appeared on k57’s Patti Arroyo Show, addressing media for the first time as the Governor’s personal liason to DC, weighing in on Representative Mike San Nicolas and it is turning into an elongated game of he said, she said.

The newest chapter in this back and forth affair between fellow democratic party members, features questions as to why San Nicolas did not take over Bordallo’s office formally used as the district office. The delay in opening of a district office has led to a backlog of inquiries and requests for the first term congressman.

“I was under the impression that he would take over the office I left. It was all designed by the federal government. They flew out to Guam and insured it was retrofitted with security measures,” said Bordallo. Patti went on to add that San Nicolas has indicated that the rent on the Bordallo office was too high. “When they came to retrofit it for us, the rent didn’t go up it stayed the same,” Bordallo replied.

December 5, marks about the halfway point for transitioning Guam politicians, as elections are held early in November and newly elected officials take office in early January. It was on December 5, 2018, that tensions between the Bordallo and San Nicolas reached a head, as Representative Mike San Nicolas penned an email to local media outlets stating that Bordallo had been less than accommodating as the former delegate transitioned out of her DC office, claiming that all was left behind was “a list of furniture and a pack of stationary”. Although Bordallo responded to a letter from San Nicolas and acknowledged that he has reached out to her, according to Bordallo, he was too late and that all of her materials were already safely stored on Guam.

“That was quite some time I can’t remember the date of the letter. But time is of the essence when you make a major move like this Patti, you know that,” said Bordallo, defending her shipping of her case files to Guam.

And while Bordallo stopped short of throwing her hat in the ring to contest San Nicolas in the next Congressional race she did dispel any thoughts of her retiring.

“People are coming up to me and I have to think about it,” she said of the next congressional race. Boradallo continued, “and you know a lot of people on Guam sad to say think that once your over 50 years old that your over the hill. If I get sick I’ll be the first one to retire.”

The full interview between Bordallo and Patti can be heard and downloaded on http://www.k57.com.