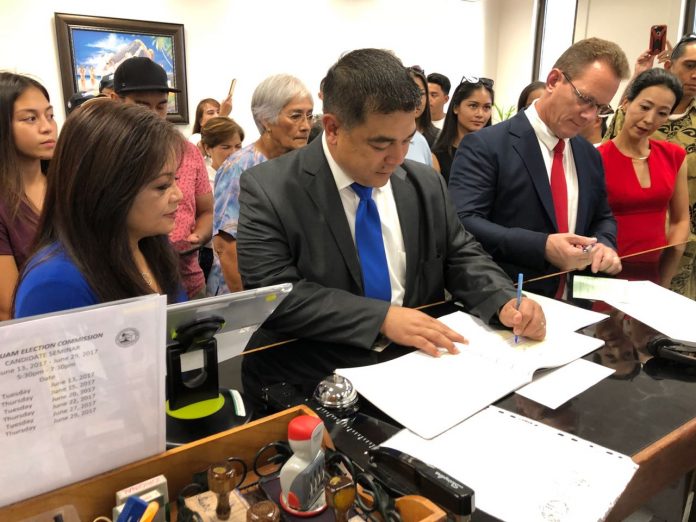 Guam – The unopposed Republican gubernatorial team of Tenorio-Ada has made it official, filing their candidacy papers at the Guam Election Commission late yesterday afternoon.

Gubernatorial candidate and incumbent Lt. Governor Ray Tenorio and his running mate Former Sen. Tony Ada began setting up for this moment in the morning but started at 4 in the afternoon with a wave at the Oceanside Pavillion before marching over to the GCIC building in Hagatna to file their paperwork with the Guam Election Commission.

The Republican team, running unopposed in the primary elections, is the fourth gubernatorial team to file this election season.

In a statement, the BOTA camp said they filed petitions with over 11,000 signatures dedicating their support to the Adelup contenders.

“Tony and I, our families and our incredible supporters have been on the campaign trail for quite some time now. We have canvassed many neighborhoods, held mass meetings in 17 villages and spoke with thousands of residents as we shared our plans to make education the key to improving the quality of life for all Guamanians,” said Tenorio.

The deadline to file for the primary elections is on June 26 at 5 p.m.