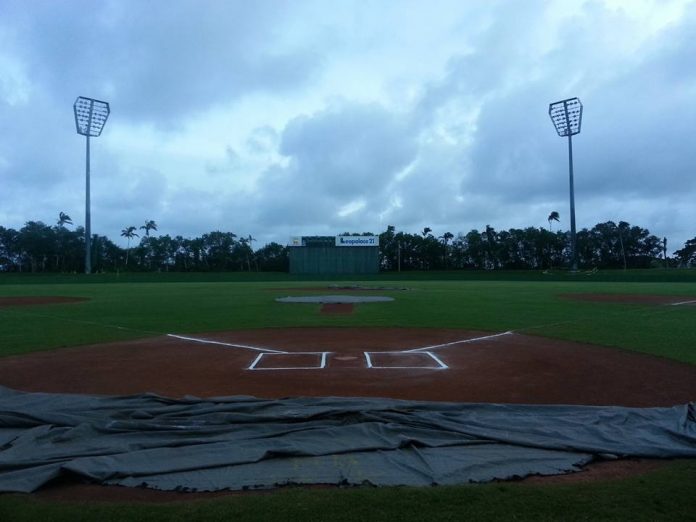 Leo Palace –  #1 Santa Rita Braves (7-0) outlasting and barely outslugging the #8 Sinajana Giants (1-6) in a 22-15 win that seems more like a football score than baseball.

The Braves who ran the table with an undefeated record in the regular season would jump out to a 15-0 lead scoring 12 runs in the second inning and looked to make short work of the Giants.

The Giants would rally behind their rowdy fans scoring 12 runs of their own in the top of the 3rd inning.  Ken Manibusan would deliver a 2 RBI triple and Frank Camacho would clear the bases with a 3 RBI double to power the Giants back into the game.

Braves reliever Joe Quintanilla would quiet the Giants offense over the final 4 innings before running into trouble in the top of the 6th inning as the Giants would cut the lead to 16-14.  Camacho again would deliver a big RBI hit.

But the Braves offense would put the game away in the bottom of the 6th inning rallying for six runs highlighted by a inside the park Grand Slam by Strike Zone Player of the Game John Carbullido.  Carbullido finished the game 4 for 4 with 2 runs and 6 RBI.

Quintanilla would close out the Giants in the 7th inning to notch the win for the Braves going 4 2/3 innings in relief allowing just one earned run with two strikeouts.

In Wood Bat action the Sinajana Giants (3-5) got a big 5-3 win over the Blue Jays (3-5) to clinch the #6 seed for the playoffs.  The Giants rallied for four runs in the bottom of the 6th inning taking the lead on a two out, two RBI double by SZPOG TJ Perez.  Paul Pangelinan went the distance allowing two earned runs with seven strikeouts to pick up the win.

For more info on the Budweiser Fall Ball Masters and Wood Bat Leagues Playoffs including live game updates, schedules and stats check us out on Facebook @ AmateurBaseball Guam.