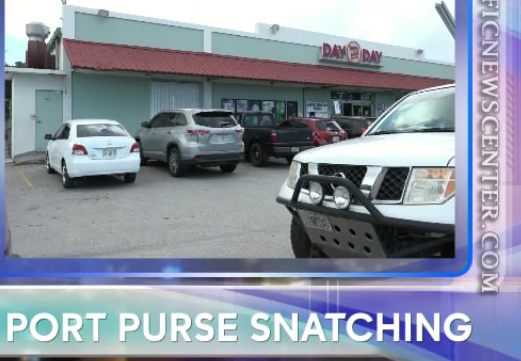 A purse snatching incident in broad daylight was caught on camera yesterday and has gone viral on social media as police track down the suspects.

In the video, a man and woman are seen loading groceries into a red sedan. A white car then pulls up beside them.

A male individual then exits the vehicle and goes toward the store’s entrance before turning around and snatching the purse from the shopping cart.

The woman tries to chase him, but the suspect drives away.

Port Authority General Manager Rory Respicio says that the incident is being investigated by Port Police and the Guam Police Department.

“I can confirm that the Port Police responded to the incident at Day by Day in Piti and the incident occurred between 7 am and 8 am. The port police took the incident report and we’re working with the Guam Police Department in the investigation,” Respicio said.

Authorities are asking anyone with information about the case to contact Guam Crime Stoppers at 477-4357.