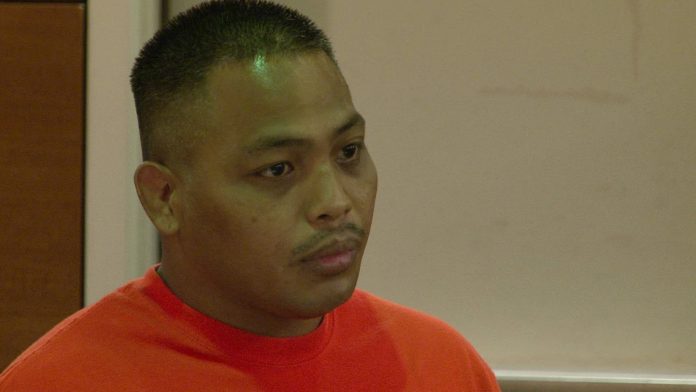 Raymond Tedtaotao Camacho is sentenced to life without the possibility of parole in the Crown Bakery abduction and rape case.

Guam – Raymond Tedtaotao Camacho will be spending the rest of his life in prison.

Camacho was sentenced today to life without the possibility of parole for the kidnapping and rape of Monique Baza from the Crown Bakery parking lot over two years ago.

Baza was in court today, along with family members, and she talked about the pain and suffering she and her family continue to live through as a result of Camacho’s actions. However, she says she’s relieved that the case is finally over and is satisfied with the sentence Camacho received.

Camacho’s attorney, Doug Moylan fought for a lesser sentence of 15 years. Camacho’s plea deal gave him a sentencing range of 15 years to life. Moylan says his client was cooperative from the very beginning and even helped convict his co-defendants Raymond Tedtaotao and Corinna Lyn Blas. But the Attorney General’s Office refuted that, saying Camacho was not cooperative and gave conflicting statements about his co-defendants.

Camacho also gave a statement of apology to Baza, telling her that he’s sorry for his actions and he blames his drug addiction for committing the crime.

But the prosecution countered that Camacho is a career criminal and his apology cannot be trusted as he’s been convicted of sexually assaulting other women in the past.

Baza also tells PNC that she did not believe Camacho was truly sorry for what he did to her.

In addition to life without the possibility of parole, Camacho received a sentence of 25 years for kidnapping Baza, which Judge Anita Sukola says will be served concurrently with his life sentence.