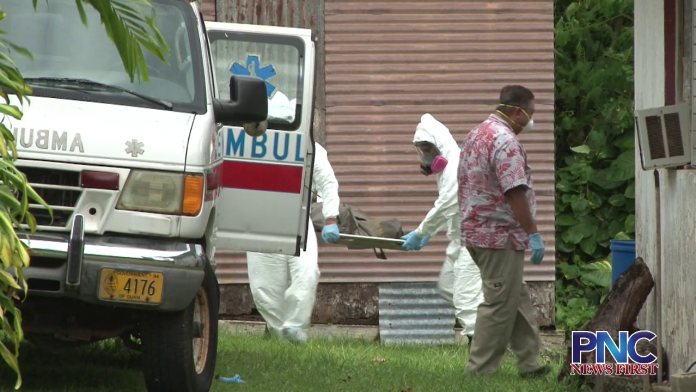 Guam – Authorities are suspecting foul play in the discovery of a decomposing body in a residence along Macheche Avenue this morning. Police are mum on the details but PNC was first to confirm with Chief Medical Examiner Dr. Aurelio Espinola that foul play is suspected as the victim’s feet were bound at the ankles by tape.

It was a gruesome scene–the badly decomposing body of a woman discovered at 358 Macheche Avenue in Dededo. Guam Police Department Spokesman Sgt. Paul Tapao could not provide much details, only confirming that it is a death investigation. Tapao says the discovery was made around 10 this morning.

Chief Medical Examiner Dr. Aurelio Espinola arrived on scene to conduct a preliminary assessment of the body. After he left the scene, PNC contacted him and he confirmed for us that the body is that of an adult female. He suspects foul play as the victim’s ankles were bound by tape. He also told us that he believes the woman has been deceased for at least two weeks as her body was so badly decomposed that her bones could be seen protruding from her skin.

Espinola notes that the body was found outside of the residence and not from within. She was wearing what appeared to be shorts and a t-shirt but Dr. Espinola could not determine the race or ethnic makeup of the victim as her face was unrecognizable.

The home’s front door had a sign above that read “E.D. Camacho” with the numbers 358 underneath. It’s unclear if the sign has any connection to the victim.

PNC canvassed the neighborhood to find any witnesses who may have information about the case, but no one would talk on camera. One neighbor told us off camera that she sometimes sees an elderly woman at the residence but could not say for sure if the woman lives there. The neighbor also told us that the last time she observed the elderly lady was about two weeks earlier.

Investigators on scene donned HAZ-MAT suits and were seen entering and exiting the backside of the home.

“It’s just to protect them from any bodily fluids or anything. It’s just part of our protocol and also for the preservation of the scene,” explained Tapao.

After several hours on scene, the Guam Fire Department arrived and later an ambulance from the Medical Examiner’s Office arrived to retrieve the decomposing body.

At this time, police are not saying whether the neighborhood or the community should be on the lookout for any possible suspects or be concerned for their safety.

“What we are asking for the community is if anybody saw anything relative to this investigation, to please give us a call. You can call our dispatchers at 472-8911 or if you feel that you would like to remain anonymous, you can call the Guam Crime Stoppers at 477-HELP or online at guam.crimestoppersweb.com,” said Tapao.

Dr. Espinola says he will be performing an autopsy next week Tuesday to determine official cause and manner of death.