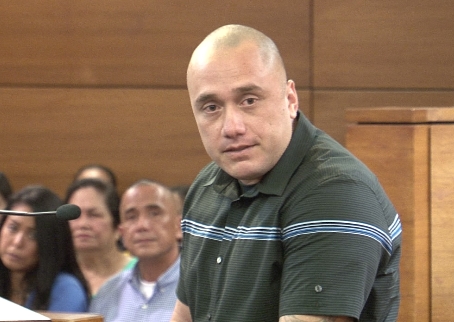 Mark Torre Jr. will not be going to prison–for now.

Guam – Former Police Officer Mark Torre Jr. will not be going to jail today as planned.

In a stunning decision, Judge Michael Bordallo ruled in Torre’s favor, granting his request to remain out on bail pending appeal. Torre was supposed to self-surrender today at the Department of Corrections Mangilao compound at 6 pm.

DOC Spokesman Lt. Jeff Limo says they even prepared for his arrival but that apparently won’t be happening.

Torre was sentenced last month to eight years in prison for negligent homicide and aggravated assault, both with special weapons allegations in the shooting death of fellow cop Sgt. Elbert Piolo. Torre was facing a total of 28 years.

The AG’s Office opposed Torre’s motion, arguing that Torre hasn’t filed an appeal yet to trigger his release and that he is merely using an appeal as a delay tactic to serve out his sentence.

In his decision, however, Judge Bordallo noted that final judgment has not yet been entered which means Torre is not able to file an appeal at this time. Judge Bordallo also said that Torre has complied with all his release conditions and that there has been no evidence that Torre is a flight risk or a danger to the community.

“This whole trial was a bogus trial. That’s the way I see it and to top it off it’s all about politics,” lamented Edison.