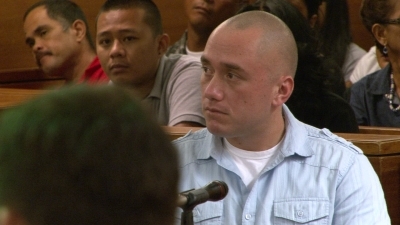 The Piolo family, meanwhile, says they are upset with the judge’s decision.

Torre Jr. is facing charges of murder, aggravated assault and manslaughter in the shooting death of fellow police officer Sgt. Elbert Piolo in  July this year.

Initially, Torre Sr. was ordered to stay away from his son and the home where the alleged murder happened, which is the Torre residence in Yigo.

Torre Jr. has been out on house arrest and has been staying at the Yigo home while his father, Torre Sr. was forced to live elsewhere.

The defense fought the stay away order saying the conditions were proving to be financially difficult for the family.

Judge Bordallo initially denied the defense’s request, but today he lifted the stay away order and is allowing Lt. Torre Sr. back into the Yigo residence.

“It’s upsetting that [Torre Sr.] gets to go home. How would you feel? Put yourself in my shoes and [my brother’s wife and kids] shoes. Their dad’s not gonna be there while [Torre Jr.’s] dad gets to come home because junior is crying for the dad to come home,” Piolo laments.

You can read the judge’s decision and order by clicking on the file below.