Guam –  Two women and a man are dead from gunshot wounds suffered at a Harmon Apartment late Wednesday afternoon.

The shots were fired at an apartment on Anthurium Lane in Harmon, near St. John’s School.

Guam Police got a 911 call reporting the shooting just after 6 pm Wednesday.

Guam Police Spokesman Officer A.J. Balajadia says that the man was found dead inside an apartment on the second floor of the 2 story apartment building. His body remained at the scene until mid evening.

2 woman were found alive at the scene and taken to GMH.

However,  GMH Nursing Supervisor Sally Quichocho says that one of the woman was Dead On Arrival. The second woman was rushed into the emergency room but she died while being treated about 8:30 pm. She would not speculate on the cause of death or discuss the women’s wounds.

Officer Balajadia said that all three suffered from gunshot wounds. A handgun was used, he said, but he could not say whether more than one handgun was involved or how many shots were fired. Nor could Balajadia say whether the shooting occurred inside the apartment, or some place else. He did not know whether any of the victims were related. The investigation is ongoing. 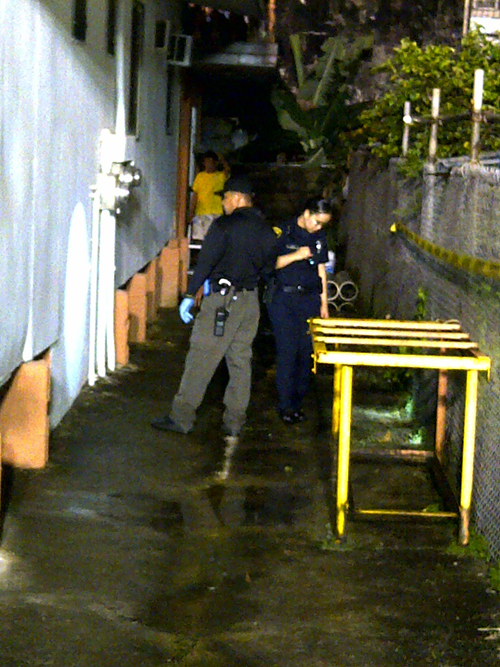 Anthurium Lane on both sides of the apartment was blocked off  by police cruisers. Officers barred reporters from approaching the apartment building while investigators interviewed witnesses and searched for clues.

The motive is not yet known.