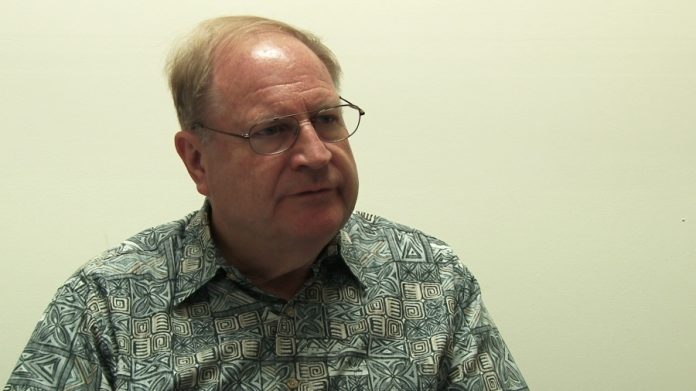 Guam – Guam – First it was members of the GMH board of trustees. Now the CEO Ted Lewis has also unexpectedly resigned from the hospital.
But before the surprising announcement, Governor Eddie Calvo visited the hospital and met with hospital staff this morning. Although he did not make the announcement then, Lewis was not present at this morning’s meeting.
Calvo has expressed dismay with Lewis’ leadership and even ordered the GMH Board of Trustees last October to look into Lewis’ credit card usage.
In December, Lewis and Governor Calvo’s Chief Fiscal Advisor Bernie Artero got into a spat via email over a $6 million request Lewis made to be able to make payroll and bring down their $20 million debt.
This bitter email exchange immediately preceded the sudden resignation of three GMH board members–the chairman, Lee Webber, vice chairperson Frances Mantanona and member Rose Grino.
Because of the vacancy left by their resignations, Governor Calvo issued an executive order to take over the GMH board and to empanel a GMH Advisory Council. Among the appointed members of the advisory council was Artero.
The GMH Advisory held several meetings with GMH staff over the weeks without Lewis, identifying three major weaknesses in billing practices.
Today, before Lewis’ resignation, the governor pointed out during his first visit with the hospital that his intervention at GMH is a significant step for a governor to make and only sends a serious message about the measures he had to take because of the failures of the GMH top management.
He noted that some of the policy changes he implemented today were simple measures “top management” could have taken.
Read the release from Adelup below:
The Governor today accepted a request from Ted Lewis to step down as CEO of the Guam Memorial Hospital Authority.

Lewis met with the administration today. He will work with the hospital’s interim CEO, Dr. Larry Lizama, to ensure a smooth transition and help with efforts to move the island’s only public hospital forward.

Lewis has noted, in previous discussions with the administration, of his plans to depart from the hospital when his contract expires in May. Governor Calvo has instructed his team to begin the search, and a new CEO should be named soon.