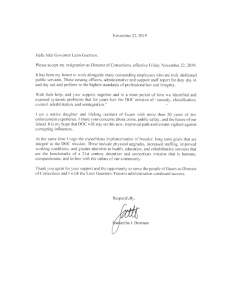 The Leon Guerrero administration has confirmed that Samantha Brennan has voluntarily resigned as director of the Department of Corrections.

Her resignation comes three days after acting Department of Corrections Deputy Director Joseph Carbullido issued a memo to all prison staff advising them that he is now in charge of all prison operations.

After Carbullido’s memo was leaked to the media, the administration issued a statement advising that Brennan was still DOC director, but she’ll be concentrating on hiring new staff.

She wrote “it has been my honor to work alongside many outstanding employees who are truly dedicated servants.”

“In a short period of time,” wrote Brennan, “we identified and exposed systemic problems that for years hurt the DOC mission of ‘custody, classification, control, rehabilitation, and reintegration.'”

“It is my hope,” wrote Brennan “that DOC will stay on this new, improved path and remain vigilant against corrupting influences.”

However, Brennan also urged “the expeditious implementation of broader, long-term goals that are integral to the DOC mission.”

Among those goals, she wrote, are physical upgrades, increased staffing, improved working conditions, and greater attention to health, education and rehabilitative services.

In a statement to the media, Governor Leon Guerrero wrote:

“I want to thank Sam for her work and for her tireless efforts on behalf of the men and women at DOC.”

She noted that Brennan “left the Judiciary to serve in one of the toughest jobs in government” and “that willingness to serve, to give of yourself in the service of others, is admirable.”

“Sam,” he said “never broke faith with her belief that a small group of people could work to make things better for the community we love.”

Inexperienced swimmers advised to stay out of the water; high surf advisory in effect for the week