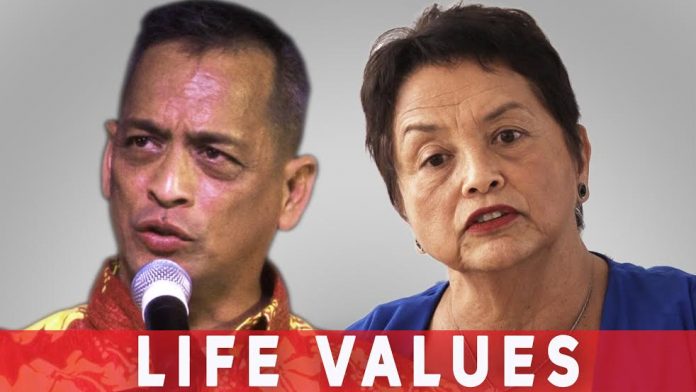 The dueling Democratic nominee and Democratic write-in for Governor of Guam are squaring off in a race that’s down to the wire and reigniting debate about abortion and quality of life just three weeks away from the general election. Pacific News Center takes a look at each candidate’s stance and considers what could conceivably be done to get such polar opposites on the same page and even singing from the same hymnal.

Guam – The gubernatorial write-in ticket Aguon-Limtiaco and their ardent supporters are loud and clear about what side of the abortion debate they’re on.

“Alicia and I believe in the protection of human life for all, most especially—most especially—the most vulnerable—all children, including the unborn,” Aguon told a crowd of hundreds gathered for his campaign rally in Anigua.

“Do we want a leader who believes abortion is the way to build a better community?” he asked a forthcoming hoot of hollered no’s.

Any pro-choice candidate facing this level of passion on an island that’s still mostly Catholic—and otherwise largely Christian—isn’t likely to make much headway spending a lot of campaign time debating this topic.

In June Attorney Anita Arriola raised fears of back-alley abortions after the last OB/GYN to perform legal abortions on Guam retired in May and an island considered culturally anti-abortion had few prospects to replace him. Some considered the doctor’s retirement a victory for pro-lifers. It ain’t always easy being pro-choice on Guam.

Enter former senator, former nurse, and the Democratic Party’s official nominee for governor in the upcoming general election, Lou Leon Guerrero, who during a public hearing five years ago testified against Sen. Aguon’s 2013 bill to criminalize the post-delivery termination of born-alive babies who survive abortion attempts.

“Most of the voters did not vote for you based on whether you were pro-choice or pro-life,” she then told legislative committee members. “Please, let’s get back on track with the more compelling issues at hand that have a greater impact to the quality of life of our people,” she said.

“My stand has always been that I am very supportive of the right of women to decide what [are] the best options for their reproductive health. I’ve always said that,” she told Newstalk K57 morning host Patti  Arroyo.

“As a nurse, I am very comfortable with that—as a mother, and as a woman, I support that. That has been my stance from the very beginning.”

Her pro-choice position may have been consistent over the years for fundamental reasons, but she refuses to let it define her candidacy.

“I’m not a single-issue person. I’m not even running on that issue. I’m running on improving the lives of our people.”

Still, the explosive abortion debate remains a defining point of departure for the burning embers of the disbanded Moral Majority and for those who still adhere to the anti-abortion movement’s line of reasoning that terminating a pregnancy at any point, for nearly any reason, by any other name, is still willful, premeditated murder that should be vilified and punished. That characterization is what keeps some anti-abortion advocates miles from the negotiating table.

But until both sides drop their defenses, recognize one another’s common humanity, and begin to talk about prevention, intervention, and making the quality of life on Guam safer for infant life, more fetuses and babies could remain vulnerable to termination, negligence, endangerment, and death whether abortions are performed legally or not.

At times the abortion debate has reached such fever pitch that it’s actually resulted in abortion clinic shootings. It’s the absolute politics of black and white, us and them, more entrenchment, more blaming, and fewer actual solutions amid the hostility and the rancor.

But is there a third way to help quiet the storm and bring healing to the surface?

Somehow the common ground may have been lost in the emotion cascading over the decades. It might stand to reason that there must be enough pro-choicers and enough pro-lifers who wish for fewer aborted fetuses and halted late-term pregnancies to make a critical difference: the prevention of unwanted pregnancies and the saving and caring for more babies who might otherwise be aborted.

If the prevention of unwanted pregnancies and the nurturing of nonthreatening intervention can both begin to congeal as the core priorities of pro-choicers and pro-lifers who can put aside their differences soon enough to prevent more abortions wherever the practice remains legal, then a bipartisan mission of intercession might begin to save more babies. And though some abortions will continue to be legally performed, perhaps it would be a worthwhile goal to diminish their numbers and therefore the perceived need for more clinics.

Less fear. Less shame. Less finger-pointing. More bread-breaking and more support for mothers and impressionable young women. This might help get us there.

And some of the more common excuses of “can’t afford it,” “it’s inconvenient,” “my parents will be angry,” and “the father doesn’t want it” may begin to loosen their stranglehold on women, so more of them feel like motherhood is a safe and natural choice.