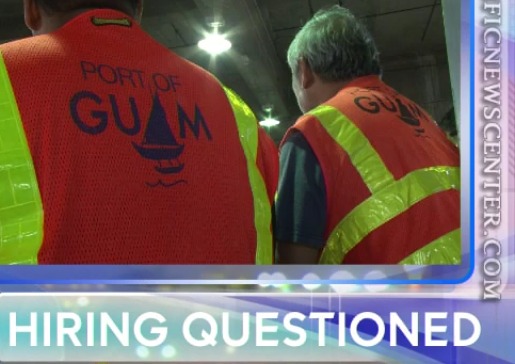 The current and former general managers of the Port Authority of Guam butted heads Wednesday morning over the hiring of a convicted corrections officer for a job at the port.

Frankie Rosalin, who pleaded guilty to official misconduct as a misdemeanor in 2019, was recently hired as part of the maintenance team at the Port Authority of Guam.

Rosalin was one of the DOC officers implicated in the conspiracy to smuggle contraband at the Department of Corrections.

Like other DOC officers convicted in the case, Rosalin entered a plea agreement and avoided jail time. He was sentenced to 1-year probation in January 2020.

In an interview with K57’s Patti Arroyo, Brown says the port shouldn’t have hired Rosalin and that his particular case brought to light a loophole in the law with regards to hiring. She says standards must be set for those who work in government.

Brown recently introduced Bill 37-36, which would prevent GovGuam employment for individuals who have pleaded guilty to, or have been convicted of, official misconduct.

“This isn’t the way it should be. I don’t know this Mr. Franklin Rosalin personally, but this isnt the standard that we should be setting for our community. If anything, we should be ensuring that all of our public officials, no matter if you got the most important position in the department or what you think is the least important, if you work for the government of Guam, you are a public servant … you are serving the people,” Brown said.

She added: “This particular case has brought the loophole in the law with regards to this. We set standards for public officials in terms of when we commit certain types of crimes. We cannot even run for office.”

Current Port Authority General Manager Rory Respicio has defended the hiring of Rosalin at the port.

“With the hiring of Frankie Rosalin, we did everything right. The position was announced and many people applied for that position. He was rated, he qualified, he went through an interview panel and the interview panel recommended him to be hired. I moved on that recommendation,” Respicio said.

According to Brown, as it stands now, the Attorney General of Guam has opined that the hiring of individuals convicted of official misconduct is solely at the discretion of agency directors.