The forecast track has shifted just a little to the north.

The center of the storm is now projected to pass just north of Saipan early Tuesday morning at which time it is expected to be a typhoon.

At 7 AM Sunday Tropical Storm Bualoi was located near 11.6 north latitude and 151.9 east longitude. It was moving west-northwest at 15 mph.

Bualoi is a Thai word that refers to a type of dessert in Thailand. 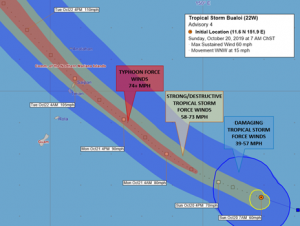 The weather forecasts for today calls for fair and pleasant conditions across the Marianas.

Residents are advised to use this day to prepare, especially if you are in the CNMI. Changes can still occur with the forecast track, timing and storm intensity.

While this current forecast calls for a category 2 typhoon with max winds of 105 mph as it passes through the Marianas late Monday or early Tuesday, it is prudent to prepare for the next category intensity in case the storm intensifies faster than currently forecast.

A Tropical Storm Watch remains in effect for Guam. This means damaging winds of 39 mph or higher *are possible* Monday. Stay tuned for changes or upgrades with watches and warnings later today.