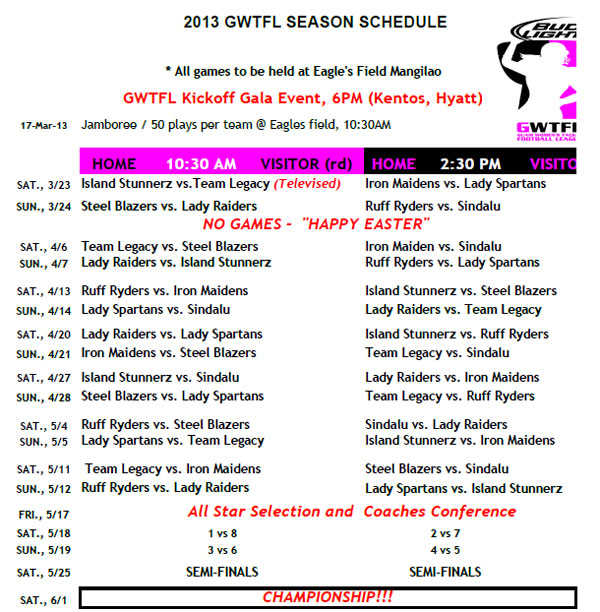 Guam – The Guam Women’s Tackle Football League (GWTFL), together with Ambros Inc., the exclusive beer sponsor of the GWTFL, announces the kickoff of the second annual season of full contact tackle football for women of all ages.

“With the Bud Light Guam Women’s Tackle Football League, Ambros Inc. is proud to provide a platform for our island’s women to showcase their talents and abilities by creating a positive and motivating environment through this sporting event. We also support the Bud Light GWTFL’s efforts
to promote safety, sportsmanship and integrity in our island communities,” said Tom Shimizu, General Manager, Ambros Inc.

The games- which will be held every Saturday and Sunday at 10:30am and then again at 2:30pm at the Eagle’s Field in Mangilao- will commence on March 23, 2013 where these 8 teams will compete to win the championship game scheduled for June 01.

The Bud Light GWTFL is an affiliate of the International Women’s Football League (IWFL) and the all star team may go on to compete at the regional and international level in an IWFL sanctioned competition.

“Since becoming an organized sport for women last year, the teams have doubled from 4 to 8; this is a sure sign that the sense of camaraderie these women develop with each other and the community as a whole is growing,” said Jessie Rosario, Bud Light GWTFL Vice President.

“The passion and sense of self-empowerment these women display on the field is quite an inspiration; it motivates us to continue to expand the league and motivate the community-at-large to empower themselves through sports,” added Marge Leon Guerrero, Bud Light GWTFL President.

“These women leave the field and take that passion and self empowerment into the community by helping others, supporting good causes and inspiring other women to do the same,” she continued.

Last year, women from many of the teams participated in various community events. This included: assisting in the Special Olympics; participating in the Adopt-A-School Program where they went and helped to clean and do minor repairs, ensuring elementary school students had a clean and healthy environment to start the new school year in; donated food and time to feed individuals at Kåmålen Karidåt; participated in various Victim Advocates Reach Out (VARO) WAVES; and took part in the Liberation Parade last year.

March 15, 2013- Hagåtña, Guam- The Guam Women’s Tackle Football League (GWTFL), together with Bud Light, the exclusive beer sponsor of the GWTFL, invites members of the community to join them this Sunday, March 17, 2013, at 10:30am at the Eagle’s Field in Mangilao to watch all 8 teams come head-to-head with each other.

The Jamboree -where the Iron Maidens, Island Stunnerz, Lady Raiders, Lady Spartans, Ruff Ryders, Sindålu, Steel Blazers and Team Legacy- will scrimmage against each other, is open to the public and is sure to be an exciting event where spectators  can get a sneak peek preview of what is to come at the first official game that is scheduled for Saturday, March 23, 2013,10:30 am.

“This will be the first time the teams will display the talent and abilities of their players to one another and where each team will see what they are up against,” said Marge Leon Guerrero, President of the Bud Light GWTFL.