Guam – Defensive strength from both the Paintco Strykers and IT&E/IP&E thwarted any scoring attempts on opening weekend of the Bud Light Masters Co-Ed Soccer League at the Guam Football Association National Training Center.

The two teams, playing the league’s first official match, battled to a scoreless draw after 90 minutes of play.

The Strykers held possession of the ball for most of the first half, playing mostly in its attacking half. One of the team’s best chances to score was in the final seconds of the first half following a corner kick play. The initial play was stopped, but a series of follow up shots were either blocked by goalkeeper Bob Kelley or a host of IT&E/IP&E defenders. To the relief of IT&E/IP&E, the ball was eventually kicked out of play to keep the score at 0-0 when referee Eladio Manansala blew his whistle to signal the end of the half.

[The Paintco Strykers’ Christina Duenas sends a pass to a teammate ahead of IT&E/IP&E defenders in a match of the 2013 Bud Light Masters Co-Ed Soccer League at the Guam Football Association National Training Center. The Strykers and IT&E/IP&E battled to a scoreless draw.]

IT&E/IP&E tried to take advantage of every opportunity to score in the deciding half, but a speedy Strykers back line prevented most close-range shots. Midway through the half, C.Y. Leung was able to steal the ball in the midfield and had a clear breakaway opportunity to go up against Strykers’ goalkeeper Keith Dickson. Leung sprinted toward the goal, but before he could take his shot in the box, Strykers defenders managed to catch up with him and kick the ball away from his feet.

The Strykers also had their scoring chances in the half, taking advantage of IT&E/IP&E’s aggressive defending style that earned them a few free kicks from various scoring positions, but were unable to convert. In the closing seconds of the match, the Strykers’ Kevin Knaeble sent in a cross that met Yuko Morimoto’s foot for a shot, but she was called offside on the play right before the final whistle. 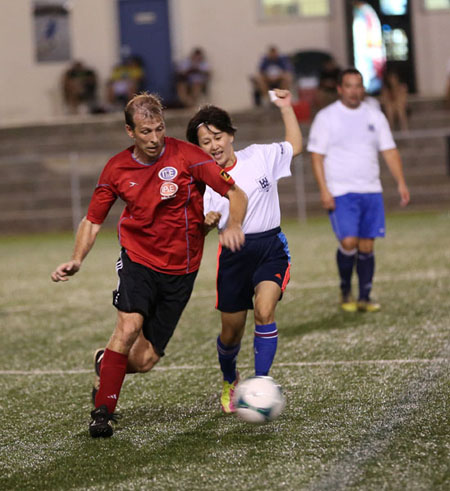 [IT&E/IP&E’s Kevin Elwell takes the ball up the midfield facing some defensive pressure from the Paintco Strykers’ Yuko Morimoto in a match of the 2013 Bud Light Masters Co-Ed Soccer League at the Guam Football Association National Training Center. The Strykers and IT&E/IP&E battled to a scoreless draw.]

The Bud Light Masters Co-Ed League matches resume Saturday with the Strykers taking on the Rovers FC at 6 p.m., followed by Hyundai Family FC facing Big Blue at 8 p.m. at GFA. Per league rules, a minimum of three women, born in 1988 or earlier, are required to be on the pitch at all times. If less than three women are available, the number of male players also is reduced. A team without any female players will have to forfeit its match.