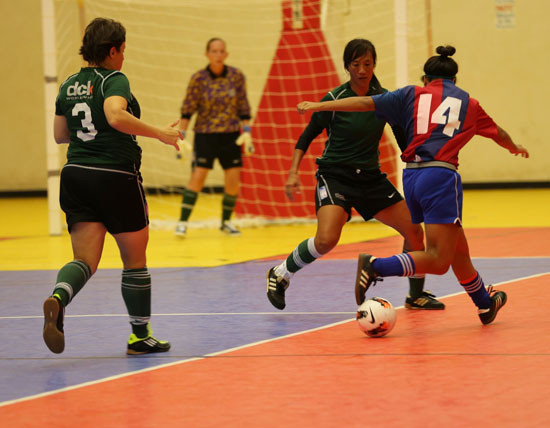 The Doosan Lady Crushers’ winning streak extended into futsal with a 10-7 win over a goal-hungry Quality Distributors team. The Lady Crushers led by as much as seven goals with only about 10 minutes left in the contest. Unfazed by the deficit, Quality’s Paige Surber completed her double hat trick of the match with three second-half goals within five minutes to cut the Lady Crushers lead to just four goals. Surber almost scored again with less than two minutes left on the clock, but the Lady Crushers’ keeper Shelby Kier was able to push teammate Simie Willter out of the way to block the shot. Quality’s Nieves Cabreza followed up on the shot to add to her team’s string of goals, but time expired to stop the momentum.

[The dck Masters Kyung Shipman and Christine Simard (3) close in on the Paintco Lady Strykers’ Mia Santos (14) as the Masters’ goalkeeper Cara Walsh watches the play on opening day of the Bud Light Women’s Futsal League Sunday at the Guam Sports Complex gym in Harmon. Santos scored twice in the Lady Strykers loss to the Masters]

In other games, goalkeeper Cara Walsh scored the game-winner after connecting on a kick-in for goal with less than five minutes left on the clock to break a first-half 4-4 tie with the Paintco Lady Strykers.

The Lady Strykers quickly gained a 3-0 lead in the first 10 minutes of the game behind strikes from Felicia Alumbaugh and two from Mia Santos.

The Masters weren’t able to find the back of the net until a penalty kick opportunity following a Lady Strykers handball violation in the penalty area midway through the half. Rhoda Bamba sent her hard shot to the bottom left corner of the goal, just escaping the reach of Lady Strykers keeper Sonja Sanchez. Later, Pauline Toves connected on a Kyung Shipman corner kick to get her team within one.

About six minutes later, a Lady Strykers own goal off a header deflection would equalize the match. Bamba came through once more on a free kick following a foul on the Lady Strykers’ Caroline Quigley. Quigley later knotted the game again after connecting on a Christina Duenas pass.

Sanchez and the Masters second-half keeper Shipman were credited with a handful of brilliant saves that could have turned the game in either team’s favor. In the end, it would be the Masters – playing iron-woman with no substitutions available – who bagged the win late in the deciding half.

League action continues Sunday with the Masters taking on the Lady Crushers at 3 p.m. followed by Quality vs. Pika at 4 p.m. and Hyundai vs. the Lady Strykers at 5 p.m. All matches are at the Guam Sports Complex gym and admission is free.