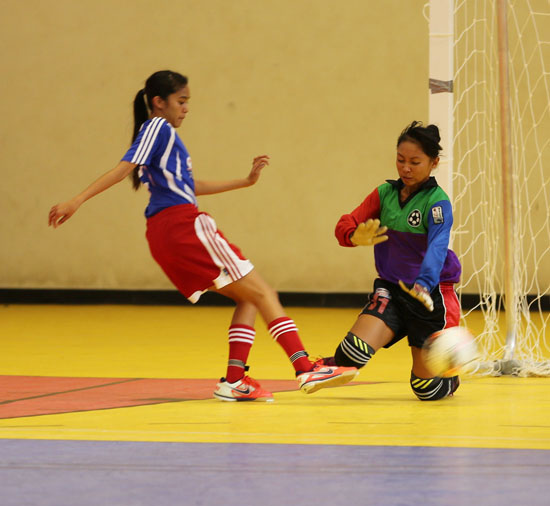 Guam – Every last second of the game counted for Hyundai against the relentless Paintco Lady Strykers Sunday during a match of the Bud Light Women’s Futsal League at the Guam Sports Complex Gym in Harmon.

After drawing 1-1 in the first half, a forced goal by Arisa Recella in the opening 20 seconds of the second half gave Hyundai its first lead of the game. Later, a couple of successful Caroline Quigley one-on-ones with Hyundai’s goalkeeper would wrest the lead back for the Lady Strykers.

Another Recella goal would knot the game again just a minute later, but a beautifully-placed Christina Duenas header off of a goalkeeper throw would put the game back into the Lady Strykers’ favor.

With less than two minutes left to go on the game’s running clock, Hyundai’s Ashley Besagar would find her first shot for goal of the season to keep her team alive in the game. Shana Spindel then closed the door on the Lady Strykers with just 14 seconds left on the clock after battling for the ball following a kick-in and getting the last touch on the ball as it snuck into the goal for the win.

Hyundai keeps its position in the league’s top two with the win, while the Lady Strykers continue to fight for their maiden win this season.

Like Hyundai, the Doosan Lady Crushers remain undefeated after two weekends of play, this time defeating the dck Masters 8-4.

The Lady Crushers held a slim 3-2 lead at halftime, and within five minutes of the deciding half, the Masters’ Rhoda Bamba knotted the game at 3-all. After a goal from Simie Willter another five minutes later put the Lady Crushers back in the lead, teammate Kristin Thompson stamped her team’s authority, scoring a trio of goals from all angles of the court, including one from the center facing the goal, to shock her opponents. The Lady Crushers’ Andrea Odell knocked in her second goal of the afternoon with 30 seconds left on the clock for good measure and the Masters’ Pauline Toves snuck one in with two seconds remaining for the final score.

Bamba also scored twice in the first half. Thompson led all scorers with four. Willter and Odell each scored twice for the Lady Crushers.

Paige Surber continues to lead the Golden Boot race, recording another double hat trick in her second-straight game with Quality Distributors, as her team defeated Pika Soccer Club 8-1 in the day’s other game. Nieves Cabreza and Estelle Alig also added to Quality’s tally. Yvonne San Nicolas prevented a Quality shut-out with a no-look, back kick toward the goal off of a Christine Ubaldo pass about three minutes into the second half.

Women’s futsal action continues Sunday with Quality taking on the Lady Strykers at 3 p.m. Hyundai will face the dck Masters immediately after. The Lady Crushers will play the day’s final game against Pika SC. Following Sunday’s upcoming games, the league takes a short break for the AFC U16 Women’s Football Championship qualifier tournament at the Guam Football Association National Training Center. All games are played at the Guam Sports Complex gym in Harmon and admission is free.