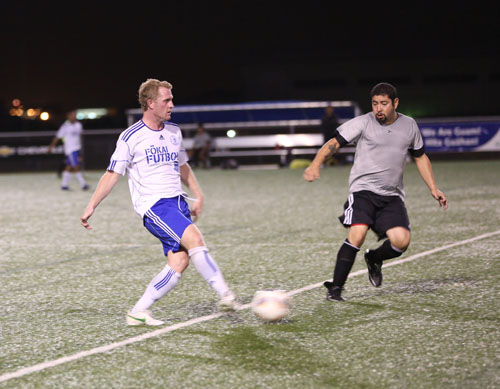 In what appeared almost routine, Shipyard’s Ashton Surber gave his team the early 1-0 lead in the 4th minute of play, but a pair of goals from the Cobras’ Jan Flores and Austin Cruz in the 12th and 17th minutes, respectively, left Shipyard on high alert. The Cobras, with a back line of defense that includes Surber’s brothers Keith and Christian, shut out Shipyard for the remainder of the first half.

The Cobras struck again in the 57th minute when Gerard Aguon drew out Shipyard keeper Kalen Lizama and finished the play from a tough angle on the right side to give his team a two-goal cushion.

Despite the deficit, Shipyard continued to attempt plays from all angles of the field through the Cobras’ tight defense. Ashton Surber managed to salvage one additional goal in stoppage time before his team conceded the game at the final whistle.

Quality retained its top spot in the league with an 8-0 shut out of Doosan FC. Golden Boot leader Scott Spindel scored a hat trick in the win and teammate Aaron Scott contributed two. Quality’s other goals came from Imny Campbell, Aric Jorgensen and Andre Gadia.

In Division II action, the Pago Bay Disasters were four minutes away from an upset victory over the division’s second place team, the Ambassadors, but gave away a penalty kick to Nick Cabuhat in the 86th minute for the 1-1 draw. Darren Smartt scored the Disasters’ lone goal in the 24th minute.

The IP&E Sidekicks leapfrogged Big Blue in the rankings following its 5-0 win over the previously third-ranked team. Corey Chamberlain scored twice for the Sidekicks and teammates Gregorio Borja, Carlo Unpingco and Thomas Calvo scored one each.

The Doosan Crushers FC are on a two-game win streak with a 4-2 win over the FC Shotguns. Thomas Sconiers, Jesse Mesa, Severino Urbano and John Guerrero each scored once for the Crushers. Kaito Shibuya and Patrick Sherman scored the Shotguns’ two goals.

In the Masters Division, Family FC remains the only undefeated team in the division with a 5-3 win over the Paintco Strykers. Chul Park struck twice for Family FC and teammates Keith Yoo, Sang Park and Byung Choi each scored once. Makoto Suzuki, Rod Hidalgo and Keith Dickson scored for the Strykers.

The Rovers FC edged IT&E/IP&E 1-0 with a goal from Ian Lawton in the 42nd minute.