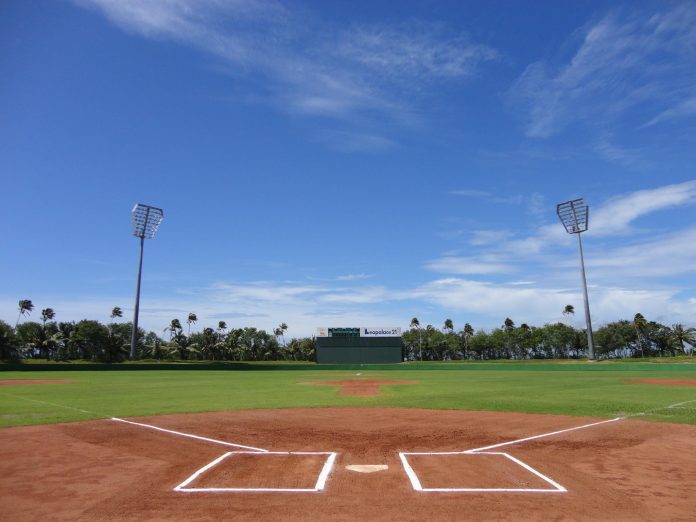 The Brewers locked in their spot in the Budweiser Fall Ball Masters Championship game with a 15-3 drubbing of Guahan Old School Sunday night at Leo Palace Resort.  Starting pitcher Dennis Rivera kept Old School off balance going 6 2/3 innings allowing only two earned runs to share Strike Zone Player of the Game with teammate Gene McDonald who helped power the offense going 4 for 6 with a run and two RBI.

The Brewers would break open a 1-1 tie in the top of the 3rd inning scoring seven runs.  McDonald started the scoring with a long triple to the wall followed by RBI hits by Paul Chaco and John Manibusan.

Guahan struggled against Rivera and didn’t get their offense going until the bottom of the 6th inning.  Lynwood Baker would lead off with a double and scoring on a wild pitch.  Calvin Toves would follow with a single and score on a sac fly by Mike Alcantara.

But it was too little, too late for Old School as Kevin Acosta would come in to get the final out and secure the win for the Brewers.  The Brewers move on to take on the undefeated Santa Rita Braves in the Masters Upper Division Championships this Sunday 4pm at Leo Palace Resort.

In the Masters lower division semifinal Island Mix Kosrae and Yona treated the fans to a down to the wire thriller with Island Mix rallying for two runs in the bottom of the 7th for the 8-7 walk off win.

Yona would break a 5-5 tie in the top of the 6th inning scoring with Ed Fejeran delivering a RBI single scoring Vic Fernandez to put Yona on top 6-5.

Island Mix would answer in their half of the 6th inning taking advantage of a Yona error to score Roman Beches to tie it back up at 6-6.

In the top of the 7th inning Yona would take back the lead with Fernandez again delivering a RBI single to score Rich Benavente to give Yona  a 7-6 lead.

But Island Mix would rally in the bottom of the 7th inning with Cruz, Palsis and Nedlic starting the inning with consecutive singles to load the bases with no outs.  Yona reliever Pat Fejeran would hit the next batter Camron Daniel to force in a run and tie up the game 7-7.   With Beches at the plate Fejeran would uncorks a wild pitch to allow Palsis to score and give Island Mix Kosrae a 8-7 walk off win.

Fernandez finished the game 4 for 4 in the loss for Yona who are eliminated after a solid fall season.

Clancy Iyekar picks up SZPOG going 3 for 4 with 3 RBI for Island Mix who advances to take on the Sinajana Giants in the Masters Lower Division Championship Game this Sunday 1pm at Leo Palace Resort.

In Budweiser Wood Bat League action the Rays secured a spot in the Wood Bat Semis with a 9-0 shutout of the Barrigada Warriors.  TJ Sarmiento went the distance for the shutout scattering five hits over seven innings.  The Rays flashed the leather with shortstop Lance Santos turning in several web gems.  Santos also went 2-4 with 2 runs and 2 RBI to pick up Strike Zone Player of the Game.

The Rays move on to take on the winner of the Sumay Braves and Chalan Pago Amigos in the Wood Bat Semifinals.

On the other side of the Wood Bat playoff bracket the Anderson Bombers used a five run 5th inning and 6 run 6th inning to pull away and down the Sinajana Giants 13-3.  Bombers starter Marc Stanco allowed just one earned run with six strikeouts to notch the win.  Jerry Santiago went 2 for 4 with 3 runs and 3 RBI to earn Strike Zone Players of the Game.

The AutoSpot Orioles will take on the Bombers in the Wood Bat Semifinals after edging the Blue Jays 7-4 on Saturday night.  The Orioles would score four runs in the bottom of the 4th to pull ahead of the Blue Jays 5-3 with Jathan Muna~Barnes leading the way with a triple and 2 RBI double.

The Orioles would add insurance in the 6th inning with an inside the park homerun by Florencio Binuya and RBI groundout by Ryan Martinez extending their lead to 7-3.

The Blue Jays would rally in the 7th inning with Jason Pangelinan singling and advancing to third on error before scoring on a Donovan Santos groundout to cut the lead to 7-4.  Reliever John McDonald would get the final out to preserve the win and notch the save for the Orioles.  Orioles starter John Pangelinan gets the win allowing just two earned runs over five innings.  Muna~Barnes finishes 2 for 4 with 2 runs and 2 RBI to nab Strike Zone POG.

For more info on the Budweiser Fall Ball Masters and Wood Bat Leagues Playoffs including live game updates, schedules and stats check us out on Facebook @ AmateurBaseball Guam.