Guam – The Southern Cobras picked up its first win since being promoted to Division I for this season with a 6-1 victory over Doosan FC Tuesday evening in a Week 2 match of the Budweiser Soccer League at the Guam Football Association National Training Center in Harmon.

The Cobras’ Austin Cruz opened scoring for both teams with a shot toward the right side following a one-on-one with Doosan keeper Raughley Alpet in the 25th minute. In a show of sheer athleticism, Doosan’s Allan Angoco was able to strip the ball from the Cobras keeper Vincent Carbullido while he fumbled with it on an initial shot block, and easily placed his shot into an undefended goal to knot the game.

Despite Doosan’s efforts to find shot opportunities, the rest of the game belonged to the Cobras, as Cruz added another goal to his credit before the final whistle, as did teammates Eddie Lee Lorenzo, Adam Rivera, Joedee Reyes, and Jan Flores.

In other weekend games, Espada FC and Quality Distributors FC remain as the only undefeated teams in Division I.

Quality Distributors and the Paintco Strykers managed only one goal each in the first half Saturday evening, but a pair of goals by Quality’s Aric Jorgensen and one from last season’s Golden Boot winner Scott Spindel closed out the Strykers’ hopes to unseat the league’s defending champions. Quality emerged with a 4-2 over the Strykers by the final whistle. James Bush scored Quality’s other goal. Rico Espinosa scored the Strykers’ first-half goal and Jan-Willem Staman added to his team’s tally in the 75th minute.

Following its 23-0 season opener, the star-studded Espada FC – made up primarily of members of the Matao, Guam men’s national team – was limited to only five goals in its 5-1 match against Guam Shipyard Sunday evening. The Espada FC’s Elias Merfalen, the current Golden Boot leader, stays atop the goal-scoring standings with two more goals from Sunday’s contest to his six-goal tally in two games. Teammate Ian Mariano also added two goals and Mark Chargualaf scored Espada FC’s other goal. Shipyard’s Ashton Surber foiled Espada FC’s clean sheet in the 89th minute, finishing his run toward the goal despite momentary protest by Espada FC team members that Surber was offsides.

Division II action also continued over the weekend with four matches, starting with the Rovers’ 1-0 win over the Ambassadors Friday evening.

On Saturday evening, Xtra Krispy FC’s Matt Robles and Arjay Valencia managed to find the back of the net in the 89th and 90th minutes, respectively, to salvage a 2-2 draw with Big Blue. 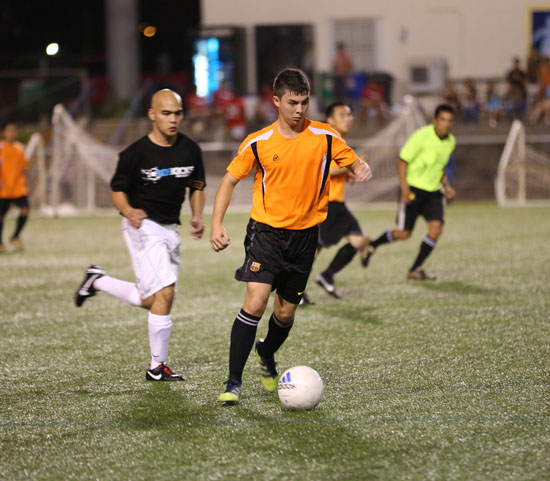 [The Orange Crushers FC’s Shawn Spindel begins his run from the midfield toward the goal past the Sidekicks’ Aaron Unpingco (in black) during a Division II match of the Budweiser Soccer League Sunday at the Guam Football Association National Training Center in Harmon. Both teams battled to a 3-3 draw.]

After Robles was taken down on his sprint toward the goal, he curved his free kick over the Big Blue wall to the opposite post to score his team’s first goal of the season. Valencia scored a minute later after effectively lobbing the ball over a sea of Big Blue defenders and its goalkeeper, all of whom converged near the top of the penalty box in an initial attempt to stop an Xtra Krispy FC run toward the goal. Ryan Crisostomo and James Griffin scored Big Blue’s goals.

In Sunday’s matches, Shawn Spindel saved the Crushers FC from defeat with a goal in the 79th minute against the Sidekicks for a 3-3 draw.

Despite trailing 2-1 at the half, the Sidekicks’ went to work early in the deciding half with Michael Sgro and Corey Chamberlain scoring within nine minutes of each other to take the lead for the first time in the contest in the 63rd minute. The Sidekicks’ goalkeeper Gian Christian Tenorio made some key saves through the half, but it would be Spindel’s hard shot on the ground that would get past him to prevent a Sidekicks win. John Guerrero and Joshua Pangelinan scored the Crushers FC’s first half goals. Jerrick Cruz scored the Sidekicks’ lone first-half goal.

In Sunday’s mid-afternoon game, the FC Shotguns came from behind to defeat the Disasters 5-1. A goal from the Disasters’ Freddy Cepeda in the 27th minute gave his time the 1-0 advantage at halftime, but the FC Shotguns answered back with two second-half goals each from Yu Tanabe and Patrick Sherman. Nohea Villatorre also scored for the FC Shotguns.