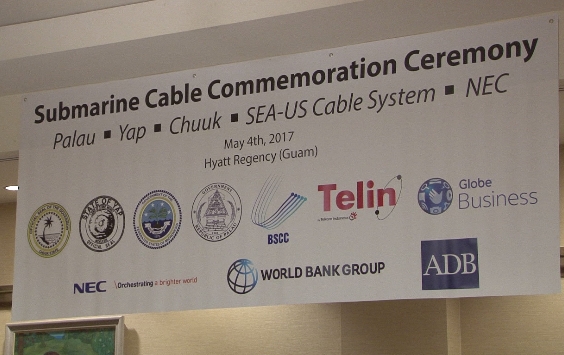 The SEA-US trans-pacific cable will connect Palau, Yap, and FSM to Guam and the U.S.

Guam – A consortium of technology companies gathered together with leaders from Yap, FSM, and Palau to build a submarine cable system to provide better telecommunications services to the Micronesia.

This morning, a commemoration ceremony was held for the construction of submarine fiber optic cables connecting Palau, Yap, and Chuuk. The SEA-US consortium is made up of telecommunications companies Telin from Indonesia, Globe Telecom from the Philippines, GTA from Guam, and Hawaiian Telecom and RTI from the United States. The cables started being laid out early this morning, and the main cable will pass north of Palau and Yap. Master of Ceremonies, Keobel Sakuma, announced that the project is expected to be completed by the end of the year.

“It’s a new Trans-Pacific submarine cable system that will run from Indonesia to California via the Philippines, Guam, and Hawaii. This cable runs just north of Palau and Yap, making it an ideal ‘cable of opportunity’ to take advantage of,” Sakuma announced. “The timeline for the ‘ready for service’ date, or when we can actually plug in, is December 31. So, we’re holding NEC to that date.”

NEC is the supplier from Japan that has been contracted to construct the cables. NEC General Manager, Toru Kawauchi, said while complications are always possible, he believes these can be overcome, and the deadline can be met.

“I’m not sure that during the construction, we may face some obstacles. But together with Belau Submarine Corporation and FSM Telecom Cable Corporation, we will be able to overcome every single challenge before us,” Kawauchi said.

The Submarine Cable Commemoration Ceremony was held at the Hyatt Regency Guam.