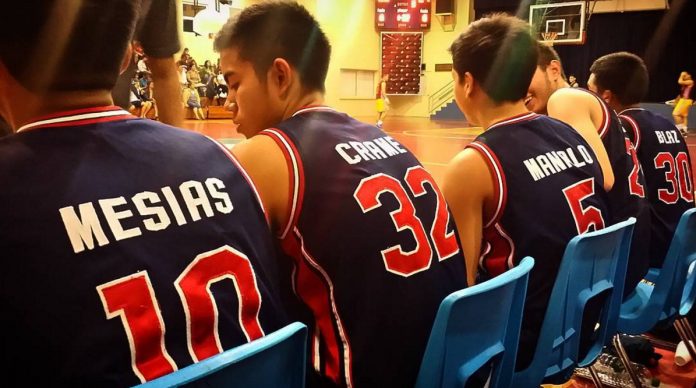 There can only be one! Friars. Bulldogs.

UPPER TUMON – The Buddy’s GSPN IIAAG Boys High School Basketball tournament continued with the opening round of the playoffs Monday night. Win and advance situation for Okkodo High and Father Duenas. There can only be one! Friars. Bulldogs. Father Duenas come out strong on the offensive side of things. Friars are able to shoot well from the perimeter getting 3’s from Leon Shimizu, Tomas Calvo and Isiah Sablan. Bulldogs though, scrappy in their own right. Austin Blaz was all over the court diving and wrestling away loose balls. Okkodo are able to get the shots to fall when driving the lane and at halftime just one point separates these two on the scoreboard, with the Bulldogs leading 24-23. Second half, belonged to Okkodo High. Bulldogs regroup at half and come out firing. Aiden Ferrera led the Okkodo charge in the 3rd period. The Senior scored twice in a row in transition. Ferrera had a great night despite playing just 3 quarters. He turned in a double double with 12 points, 13 rebounds. Okkodo bounce the Frairs to advance to the semi-finals after losing two in a row over the weekend. 51-39 the final. Bulldogs set to play the defining champions, the JFK Islanders tonight.