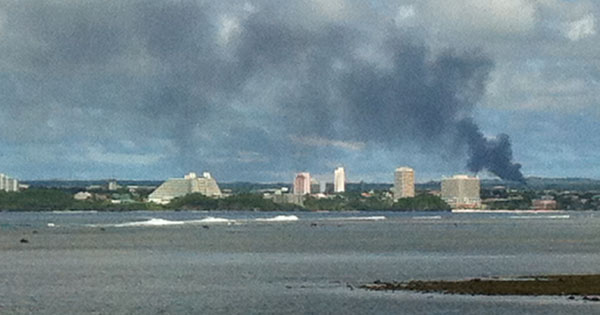 Guam – 3 Guam Fire Units along with a water tanker from Andersen Air Force Base are battling a fire at the Global Recycling Center in Dededo.

Burning tires and junked cars have sent up a plume of  black smoke that can been seen across northern Guam. But what caused it, is not known at this time.

Heavy equipment operators have also joined in the effort to put the blaze out.

Dededo Mayor Melissa Savares on the scene of the fire told PNC News that it broke out shortly after the completion of an Guam EPA inspection.

Guam EPA has dispatched a team to check on air quality and pollutants in the smoke. No evacuations have been ordered at this time, said the Mayor.

On the K-57 “Big Show” with Travis Coffman, Guam EPA Spokesman Tammy Jo Anderson Taft said “If you don’t have to be in that area, stay away from it,” adding, “if you stay in the area, close your windows and doors to keep the smoke out of your homes.”

[ Fire in Dededo as seen from Adelup]