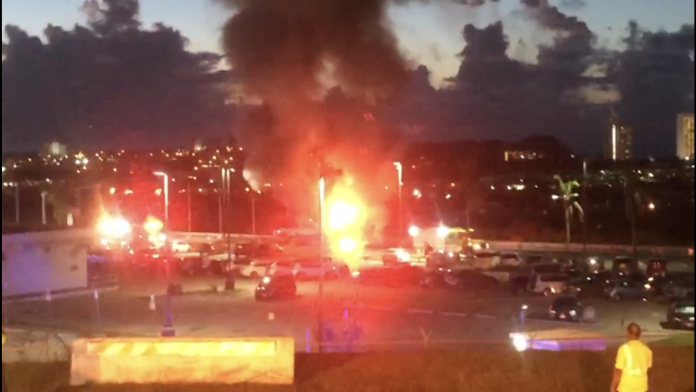 Fortunately, the driver of the tour bus, Eugene DeGuzman, safely removed all passengers before the flames spread to the passenger area.

It happened around 7 p.m. Wednesday. Brad Kloppenburg of Kloppenburg Enterprises the tour agency they had just finish loading a group of 30 passengers from the airport and their luggages onto the tour bus. The bus driver turned onto Airport Road coming from the passenger loading area when a passing motorist noticed flames near the engine of the bus.

The passerby flagged down the driver of the tour bus who immediately stopped the bus and evacuated everyone on board.

“He was very quick to act and respond and he seemed to be–did a good job of keeping his composure and the important thing was that he was able to get everybody safely out,” said Kloppenburg of DeGuzman who is an employee of Kloppenburg Enterprises.

“We don’t know exactly what happened. iIt was in the rear of the bus where the engine is located so the fire department was on the scene, obviously, to put the fire out and they were able to kind of do an initial onsite assessment. But at this point it’s not determined. So it’s my understanding they should have a report available. I would imagine that would probably not be until some time next week,” he noted.

Kloppenburg adds that they will be working with insurance agencies and the tour agencies for any potential claims for damage that resulted from the fire.