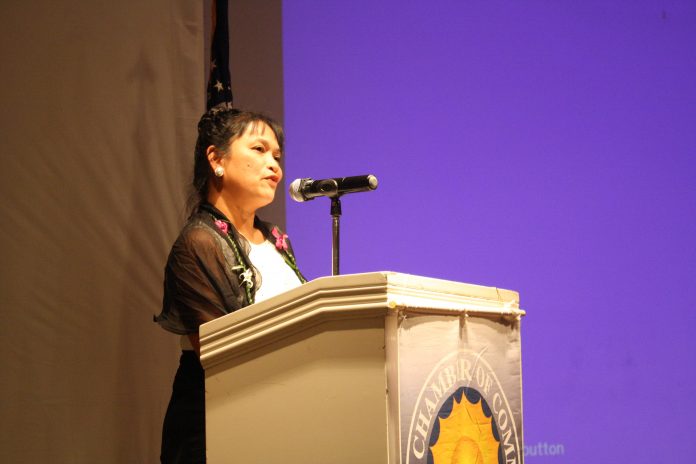 “I am committed to continuing the success set forth by my predecessor. I know I have big shoes to fill,” said Incoming President Velma Palacios.

Guam – As the casino industry establishes itself and more investors express interest, the business community on Saipan expresses concern over an inadequate local labor force.

There aren’t enough CNMI local US residents to meet the demand of our current and future economy. That’s according to outgoing Saipan Chamber of Commerce President Alex Sablan. He highlighted the need for government agencies and local employers to hire U.S citizens first to fill the space that will be left as the island experiences it’s 7th year of transition to replace it’s CW workers. Sablan says, it’s time to take the law seriously.

The islands labor force took center stage at the Saipan Chamber of Commerce Installation Dinner last Saturday, where a new board of directors was sworn in and it’s new president assumed office.

“I am committed to continuing the success set forth by my predecessor. I know I have big shoes to fill,” said Incoming President Velma Palacios.

Governor Ralph Torres vowed to collaborate with the Chamber in pursuing it’s mission. Torres says, “Your business establishments deserve the continued protection of our government…We need you so that we can contribute to our economic growth.”

Youn, who grew up on island, started his business career at Tinian Dynasty Hotel as a sales manager. He pledges to be a more active participant in the chamber now and reiterates the concerns of it’s members.

“We are getting a sudden increase of the population due to the casino and other business activities. I personally think that we do not have enough infrastructures, education, and the laws and the labor force in every aspect and so that is the biggest challenge we have right now,” said Youn.

The Saipan Young Professionals, comprised of over 50 members, is a committee under the Chamber and was present to witness the event. It’s original founder Mable Ayuyu explained that the group is imperative in the chamber’s growth.

“With us young professionals we will be filling their shoes in the future so it is really nice to learn what has made them succeed and what works now and what can be done to improve in the future,” said Ayuyu.

An economic future still unclear, but in the good hands of a burgeoning business community.