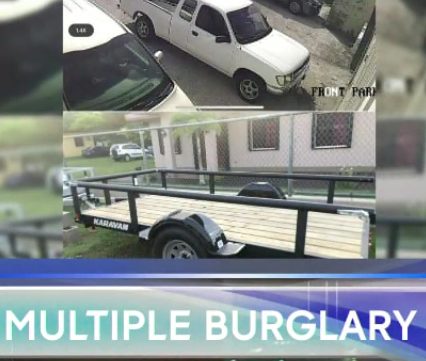 At least two businesses in the Harmon industrial park area were hit by thieves over the weekend. PNC met with one of the owners of the targeted businesses who has been hit multiple times over the years.

On Sunday evening at around 9 pm, Jeff Rios’ auto detailing shop was targeted by opportunistic thieves.

“It looked like just one individual was in our fenced-in area behind our other warehouse which is across the street from here, we’re down here in Harmon. We didn’t notice anything until 10 am that morning when we decided to go over there and grab our work truck and yeah, we noticed that the gate open,” Rios said.

Surveillance video captured the culprit driving away from the warehouse in Rios’ white extra cab Toyota Tacoma and taking a right onto Harmon industrial road. But taking just the truck wasn’t enough.

“These guys are pretty slick. You know they were in there for 40 minutes from about 8:20 pm when they got in there Sunday night and just figured out how to get the truck started and probably break the steering wheel lock. And then, they cut the lock from the gate. It wasn’t enough to steal the truck. They stole the trailer as well,” Rios said.

Rios shares that he wasn’t the only business to be hit. Up the street, another detailing shop was burglarized.

“My buddy John Cruz down the street …  he owns another detailing shop and he told me he got hit as well that night. They stripped a few cars from his place, his customers’ cars and I think his personal cars as well. It’s a real bummer, you know, to be violated like that,” Rios said.

Rios was hit by thieves last month as well. In that incident, the culprits made off with his sister’s wheels and some equipment. Rios says the thieves removed the tires from the vehicle and broke into a shipping container.

If anyone has any information regarding this theft complaint please contact GPD at 472-8911.