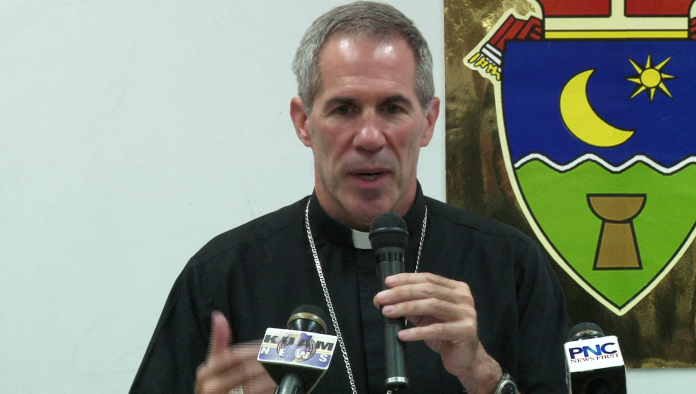 Archbishop Anthony Apuron’s canonical trial could come to a close within the next few weeks.

Guam – Whether or not Archbishop Anthony Apuron is cleared of sexual abuse charges in Rome, his potential return to Guam would be a disaster for the island. That’s according to Coadjutor Archbishop Michael Byrnes who shared his personal opinion of the disgraced Apuron whose trial is in its final phase with a decision expected soon.

“There’s been a tremendous loss of trust that’s really hard to win back,” noted Byrnes.

Archbishop Byrnes called for a press conference today to give an update on the canonical trial of Archbishop Anthony Apuron whose faculties were removed about a year ago after allegations of sexual abuse surfaced from multiple former altar servers dating back to the 1970s.

“The discovery period of the trial has ended and the next phase, which will happen sometime in the next several weeks, will be a convening of the three judges to deliberate on what they heard,” Byrnes said.

Archbishop Apuron’s canonical trial began earlier this year in Rome but the specific charges have not been disclosed. Byrnes says unlike civil cases, a canonical case is confidential. With the discovery phase now over, the next step is for three judges to deliberate and then ultimately decide Apuron’s fate.

“We will hear the decision and there’s three possibilities: not guilty, guilty or not proven,” explained Byrnes.

Each decision has its own set of consequences. If Apuron is found guilty, penalties will be assessed. But if Apuron is found either not guilty or not proven, Byrnes says he’s not exactly sure what will happen next since this is the first time a bishop has ever gone on trial for sexual abuse allegations. What is certain is that Apuron will have an opportunity to appeal the decision.

“What that appeal would do would be to simply review the process. Was the process followed exactly?” noted Byrnes.

Regardless of the decision, the thought of Apuron returning to Guam and potentially being reinstated if found not guilty is a troublesome one; so troublesome that a typically diplomatic Byrnes felt the need to, albeit graciously, offer his own two cents on the matter.

“One of the things I’m saying is I think it would be a disaster if Archbishop Apuron were to return as the bishop of record,” expressed Byrnes.

A bishop being accused of sexual abuse is the more deplorable of the charges, but the church Apuron left in his wake was in such disorder that his poor leadership skills, in Byrnes’ opinion, is enough to warrant removal.

“There was a very widespread disarray and ineffectiveness of many of the operations that you would expect to be going on in a regular archdiocese. Some of the consultative bodies were not being utilized in the way they should’ve been used. Some of the policies that had been around for a long time, for instance, the sexual abuse policy, was sorely lacking,” Byrnes asserted. “I feel that the sentiment of a lot of the faithful is we need something different, something new, and I’m not trying to say you need me.”

Whatever the decision may be from the tribunal on Apuron’s fate, any attempts at salvaging his once holy image may be too little too late.

A hearing that was scheduled for today in federal court for several of the sex abuse lawsuits filed against the Archdiocese of Agana have been rescheduled to July 11 at 9:30 am.