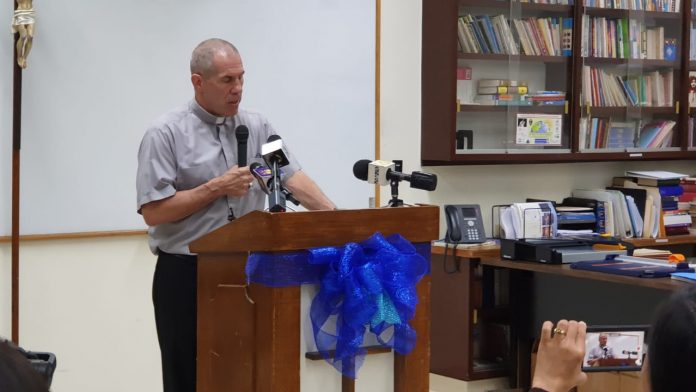 “We’ve always been a church with faults. This is our turn to deal with some of the ugly parts in the church – the failures. the sins. the crimes.” – Archbishop Michael J. Byrnes

During a press conference Friday, April 5, Archbishop Michael J. Byrnes of the Archdiocese of Hagåtña said he is willing to request Vatican leadership to allow former Guam archbishop Anthony Apuron to come back to Guam and stand trial.

The Vatican has officially removed Apuron from his post and upheld its initial guilty ruling announced in March 2018. Apuron appealed the ruling asserting his innocence, which he still clings to, to this day.

During the press conference, the focus of Byrnes is on the healing of those who were directly affected by this case, as well as Guam’s faithful. The matter of providing closure to the victims and their families also came up.

Since the first case on child abuse was unearthed more than two decades ago, certain sectors of the community criticized the church.

When asked how he can defend the church after the discovery of past clergy abuse cases, Byrnes said, “The church is more than its priests. It’s more than its bishops. It’s the place where Jesus Christ is consecrated in the Eucharist.”

He added, “We’ve always been a church with faults. This is our turn to deal with some of the ugly parts in the church – the failures. the sins. the crimes.”

PNC asked him what his message is to the faithful and to those who criticize the church.

Justice is going to mean something different to each person. For most, it is ‘tell me to your face that you are sorry.’ That hasn’t happened. I’m standing in the place of Bishop Apuron to apologize to the victim survivors. But I’m not him,” Byrnes said.

“I think the biggest proof the people are looking for is – never again. We never want this to happen again.”

Byrnes went on to say that the Church is doing everything that it can to provide training and counseling to anyone working with the church on identifying signs of any abuse, especially children.

There is another clergy abuse case being looked into by the church, according to Byrnes. However, he did not provide any details about the case.