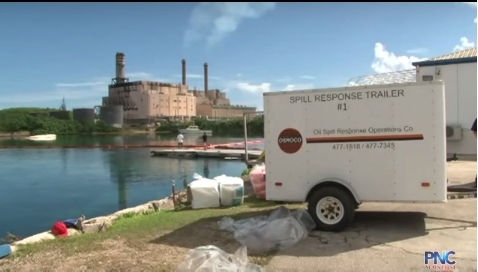 However oil recovery by skimmers and vacuum pumps can be very effective if caught early enough.

Guam – Although an investigation into why Cabras 4 exploded is incomplete, the U.S. Coast Guard estimates that at least 1,000 gallons of dense, thick oil spilled into Apra Harbor and the surrounding waters as a result of the explosion back on August 31 of last year.

According to the U.S. Coast Guard, an estimated 1,000 gallons of fuel oil number six and water mixture was discharged into the water surrounding the Cabras power plants. The us coast guard issued an administrative order to GPA shortly after the Cabras explosions to clean up the spill which they say posed quote “an imminent and substantial pollution threat to the navigable waterway and environmentally sensitive areas of outer Apra Harbor.” As a result, USGC charged GPA with sampling the containment pond next to the Cabras plants. So what is fuel oil #6? According to the National Oceanic and Atmospheric Administration, fuel oil six is persistent oil; only 5-10 percent is expected to evaporate within the first hours of the spill. Additionally, fuel oil 6 can be carried hundreds of miles in the form of scattered tar balls by winds and currents. However oil recovery by skimmers and vacuum pumps can be very effective if caught early enough.