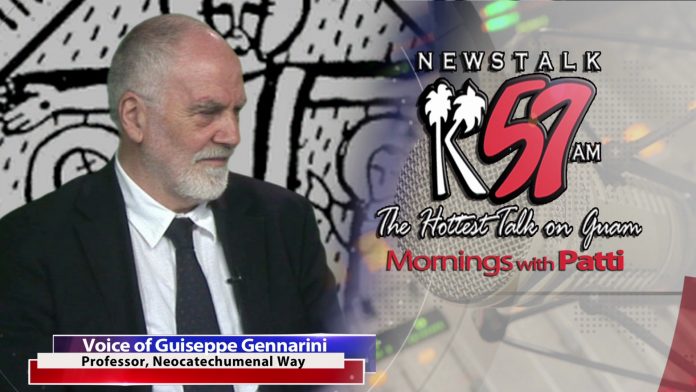 Callers were able to call into K57 to ask some tough questions of Professor Giuseppe Gennarini.

Guam – Things got pretty heated on K57 this morning as the Gennarinis were the guests on Mornings with Patti show. Halfway through the show a number of callers began asking some tough questions forcing the leaders of the Neocatechumenal Way to go on the defensive.

Some local Catholics who have been openly frustrated with Giuseppe Gennarini had a chance to openly ask questions of the Neocatechumenal Way professor, first on The Big Show with Travis Coffman yesterday and this morning on Mornings with Patti.

Gennarini and his wife, Claudia, start off explaining the motivation behind the Neocatechuman Way, especially with today’s youth.

“The youth is in a very serious situation and this is why so many pastors, so many bishops, the popes have always supported the Neocatechumenal Way–as one way, not the only one,” explains Gennarini.

“The fundamental documents, it is first of the statutes and second are all the itinenary that’s been approved also by the congregation for faith and for the Vatican. Then there are the speeches of the holy father, for example the speeches the holy father made, Francis made in 2015 and he says this, is the Neocatechumenal Way, a true gift of providence to the church of our times,” says Gennarini.

But things got heated pretty quickly as the conversation progressed into other controversial topics as host Patti Arroyo began taking in questions from callers.

“But ‘the way’ is taking a lot of people’s land, coming and asking them for their land and some documents of coming to homes asking to be the beneficiary of their insurance policy,” noted one caller.

Gennarini said in response: “It’s not true that anybody goes around the houses asking for properties and insurance policies and for … amassing people’s properties. It’s not true.”

Former Senator Bob Klitzkie, who has been following the controversy regarding the RMS property also called in. “The articles of incorporation in the Redemptoris Mater Seminary say that it is a Guam non profit corporation. The fact that there is a single incorporator does not make it a corporation sole, because under our law–” began Klitzkie as Gennarini cut him off.

“The first thing is this is a sole corporation which is, it’s not a–” Gennarini tried to explain.

“You are wrong,” Klitzkie responded.

But Klitzkie rebutted with: “The bylaws of the corporation say that the guarantors have power to veto anything.”

“No the power only to guarantee the purpose that this remain a seminary,” responded Gennarini.

You can listen to the full interview: http://www.pacificnewscenter.com/pnc-k57-interviews/9189