Guam – Governor Eddie Calvo and Guam Guard Major General Benny Paulino were in Mississippi over the weekend, at Camp Shelby, to visit with Guam Guard members about to deploy to Afghanistan.

READ the release from the Governor’s Office on the visit to the Guam Guard Troops:

Pre-dawn Visit
Before the sun was up at Joint Forces Training Center at Camp Shelby, in Mississippi, Governor Eddie Baza Calvo and Major General Benny M. Paulino, had already greeted Soldiers from four of the seven companies that make up the 1st Battalion, 294th Infantry Regiment. These are the Soldiers preparing for their deployment to Afghanistan.

Training for Afghanistan
The unit, composed of about 600 Soldiers from the Guam Army National Guard, is set to leave in a few weeks to conduct their mission in support of Operation Enduring Freedom.

The Soldiers are going through more mission-specific training at Camp Shelby since leaving Guam in early March. Camp Shelby is a sprawling training center in Mississippi, complete with mock Afghan villages and forward operating bases.

CALVO: “I look to them as role models of self-sacrifice.”

“I look to them as role models of self-sacrifice… If there is anything that exemplifies Easter, it is this,” Calvo said.

“I want us to dedicate this year to our troops.” Calvo said island residents can show their support for the troops in many ways, such as in how we treat our neighbors, help those in need, and find ways to help improve the island.“I told the troops I am committed to ensure that the island they left will be in better shape when they return.” 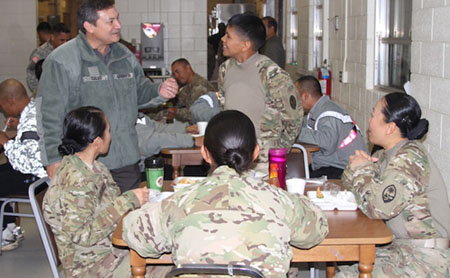 LTC Michael Tougher believes that Governor Calvo’s visit was a morale booster for the troops. “I think it was a great opportunity for Soldiers to see the governor before they leave. It reminds them that they are representing Guam. It also lets units supporting us here know that there is strong support from our island community.” Governor Calvo brought with him several gifts that family members on Guam asked him to send to their Soldiers.

Calvo & Paulino Spend Easter with Troops
Governor Calvo and Major General Paulino also spent time with the Soldiers at the two dining facilities during their breakfast periods, and visited a mock forward operating base, where some of the units were training.

They also attended an Easter non-denominational service conducted by the Battalion chaplain, after the governor presided over the promotion of Master Sergeant Duane Perez.

This is the largest deployment of troops for the Guam Army National Guard since its inception on July 21, 1981.