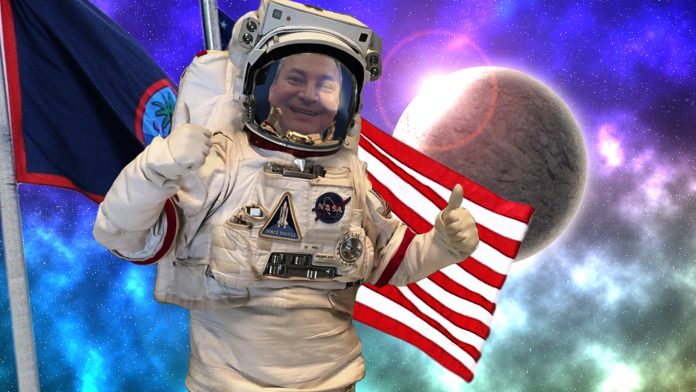 Guam – Ready for lift-off? It’s space-port Guam. In what looks like a cue from the Trump Administration’s Space-force, Calvo appears to be boldly going into the final frontier.

In the waning days of the Calvo Administration, Guam’s outgoing governor announced that he plans to establish a spaceport on the island.

In the Governor’s weekly address, Calvo says the Guam International Airport Authority is currently conducting feasibility studies to establish safe operations. Calvo adds that his administration is working with the Federal Aviation Administration to accomplish this objective and hopes to complete this work by next year.

“I am looking forward to seeing this become a new industry for Guam. Imagine, our children being a part of space exploration and the next level of communications and technology.” Governor Eddie Baza Calvo

The address also mentioned that a couple companies have shown interest in partnering with Guam on this initiative. When asked if the Governor could share which companies in particular have shown interest, Governor’s Spokeswoman Oyaol Ngirarikl responded “No.” She did defer questions to the Airport, but as of press time, no response has been received from GIAA.

When asked about safety concerns given that the airport is within close proximity to residences, Ngirarikl clarified that the spaceport would be accommodating satellites that will be attached to a plane such as a 747 which would take off in a typical fashion and then release the satellite when it reaches a certain altitude.