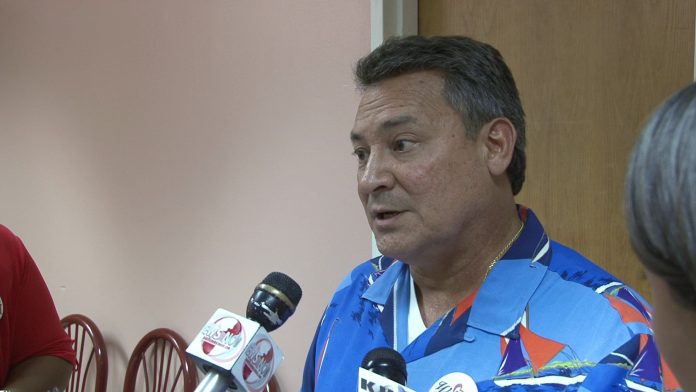 Governor Eddie Calvo says he will definitely take action by August if nothing is done to move the GMH bill forward.

Guam – Governor Eddie Calvo is firing back at Senator Michael San Nicolas for holding up his Guam Memorial Hospital transformation bill in committee. The governor warned that he will use his organic act authority if San Nicolas forces his hand.

Governor Eddie Calvo is responding to Senator Michael San Nicolas who on Tuesday held a press conference where he announced that he would not be scheduling a public hearing for the governor’s bill 338. The bill proposes a massive GMH bailout to the tune of $170 million and would require refinancing of existing debt as well as raising taxes.

“I’m disappointed. This has been the track record for Senator San Nicolas,” says Governor Calvo. “I’m hopeful that he will reverse the public statement that he’s made in regards to holding a hearing because his job is not as one invidivual but as a group of 15 to hear and put forward to the public a policy.”

The governor points out that this is not the first time that San Nicolas has held up his bill in committee. A previous measure the governor submitted sat idle in San Nicolas’ committee on taxation for about a year before it was passed and as a result, the governor says, “What could’ve been a $70 million savings went down to $45 million in savings. But it was months and months of delays focused on Senator San Nicolas’ non action. So he has been par for the course.”

The bill no doubt is a contentious one that’s divided many because on the one hand it’ll eliminate a $30 million debt at the hospital, provide an additional $15 million cushion, renovate areas of the hospital that are in disrepair and provide an outpatient facility that will be structured to receive larger reimbursements from the federal government.

But on the other hand, a project of this magnitude will also require raising some new money through tax hikes and other rates and fees that the public will have to pay for.

If San Nicolas continues to stand by his decision to let the bill die in his committee, the governor says he will take other measures. Either way, says Governor Calvo, action will be taken by August.

“Potentially, if he’s forcing my hand, there’s other ways a governor–I could call him into session. But I’m hopeful that that young man could be a little bit more politically mature and understand that this is not youth congress anymore,” he argues. “And you’re playing with people’s lives here. You’re playing with the viability of a hospital and of so many individuals and entities that are tied to keeping this hospital afloat. I’m not into his political games and I’m hoping that senator san Nicolas can seriously consider this because it is a life and death matter.”