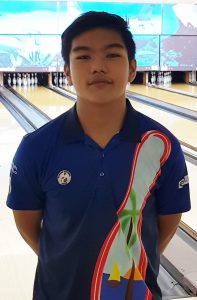 dissected lanes 15 and 16 one frame at a time as he strung nine strikes in a row ousting top seed Jay Leon Guerrero in the process.  Camacho left a pin seven on the tenth frame and closed out with a 279 game as Leon Guerrero could only watch him defend his crown and claim his third Pin Point Guam King of the Lanes title of the year.

In the semi-final matches, Leon Guerrero out bowled Josiah Lanuza as a missed fourth frame proved costly for the 9thseed.  Lanuza’s strike in the final stanza forced top seed Guerrero to strike in the tenth.  The top seed delivered to advance to the finals.  Camacho threw nine strikes to counter a seven bagger by Cesar Villanueva for a 254-242 decision.  Villanueva led through eight frames until a missed pin four opened the door for Camacho who connected strikes on the ninth and tenth frame for the victory. 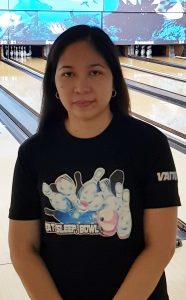 earned her second Pin Point Guam Prince of the Lanes title using consistency on her deliveries.  With a fifty-one pin handicap, Ersando spared her way to the title beating out second seed Cam Santos 147+51 to 165+26.

Both Top seed Ersando and 2nd seed Santos used their handicap advantage to earn their finals appearance in the semi-final rounds.  Ersando got past 5th seed Nick Gutierrez while Santos slipped past 4th seed Raymond Cruz.

The next Pin Point Guam King and Prince of the Lanes monthly tournament will be held on Sunday, November 18, 2018, 9:00 a.m. at the Central Lanes Bowling Center