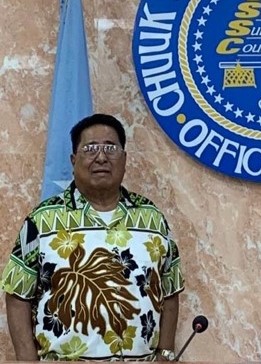 Chief Justice Noket has made a significant contribution to the Pacific Judicial Council for nearly two decades. Chief Justice Noket’s positive attitude, desire to be of service to others, and his great sense of humor, even during his darkest hours, has touched us all.

Our deepest condolences, best wishes and love goes out to his family, his court, and his nation during this difficult time.

He was appointed as an Associate Justice of the Chuuk State Supreme Court in 1998 and served in that position for one year. In 2000, he served as Directing Attorney for Micronesian Legal Services Corporation before he was ultimately called back to the bench in 2006 to serve as the Chief Justice of the Chuuk State Supreme Court. Chief Justice Noket graduated from Xavier high School and attended the University of Guam for 2 years.

He attended numerous legal trainings with Micronesian Legal Services Corporation (MLSC) and judicial courses with the American College of Trial Lawyers and at the National Judicial College in the United States Mainland, the William S. Richardson School of Law, Honolulu, Hawaii, and in Australia from the Federal Court of Australia. Chief Justice Noket had over thirty years of accumulated legal experience in the FSM and a distinguish record of public service.

“It has been an honor to work closely with Chief Justice Camillo Noket, President of the Pacific Judicial Council. During his term as President, Chief Justice Noket has worked closely with our Education Committee to create accessible programs and initiatives designed to improve the administration of justice in our pacific islands.

He is held in high esteem throughout Micronesia and we will miss him dearly. On behalf of all the Chief Justices, Chief Judges, Presiding Judges, Judges, and staff from the Federated States of Micronesia National Court, Chuuk, Kosrae, Pohnpei, Yap, Guam, CNMI, American Samoa, and Palau, we extend our deepest sympathy and prayers to Mrs. Noket, her family, and the Chuuk judiciary.”

Chief Justice Philip Carbullido, Pacific Judicial Council Past Education Committee Chairman commented that: “It had been an honor serving with Chief Justice Noket on the Pacific Judicial Council for the past fourteen years. CJ Noket fully supported the education and training of judicial officers throughout Micronesia in his capacity as President of PJC. He felt that judicial education was paramount to an effective third branch of government. Similarly, his friends and colleagues will sorely miss his jovial spirit and laughter.”

“It has been a great privilege and honor to have known and worked with Chief Justice Noket. All will remember his cheerful demeanor, quick wit and hearty laughter.

Along with these traits, I will remember his tremendous pride in his island, its people, his court and staff, and especially his family.