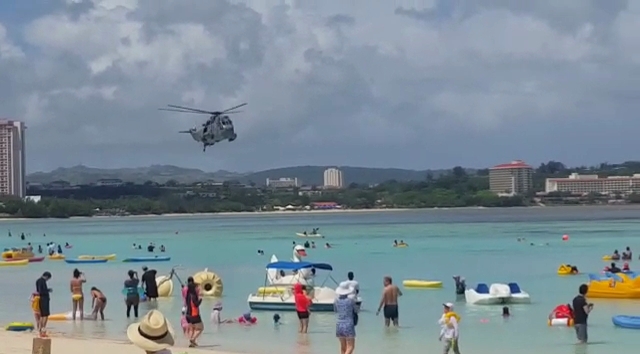 Beachgoers got an unexpected visitor in Tumon Bay Sunday morning.

Guam – You may have caught a glimpse of a helicopter flying low along Tumon Bay Sunday morning on social media. Joint Region Marianas says they have asked the pilots of that helicopter to avoid heavily populated areas.

The helicopter was seen Sunday morning hovering near the shores of Tumon Bay as beachgoers watched in amazement. Residents questioned the behavior as it is not common to see aircraft in the area, especially during weekend hours when the beaches are crowded with locals and tourists alike.

It turns out the helicopter belonged to the Royal Canadian Navy which took off from HMCS Winnipeg. The helicopter was one of two Canadian Navy Destroyers visiting Naval Base Guam and was en route to Andersen Air Force Base at the time it buzzed by Tumon Bay beaches.

In a statement, Joint Region Public Affairs Officer Lt. Tim Gorman said, “Although the helicopter was in FAA-approved air space, we have reminded out partners to be good neighbors and to avoid disturbing heavily-populated areas.”